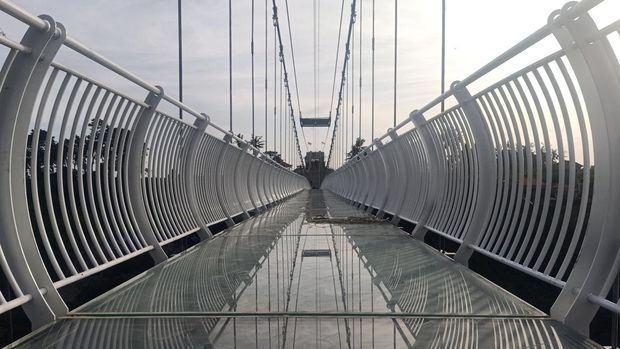 Beritabali.com reports that the Balinese Regency of Gianyar is preparing to open Bali’s first glass bridge in the Village of Saba, Blahbatuh District, in September.

Frequently unsettling to the uninitiated, guests can walk the elevated 199-meter distance between Banjar Blansinga to Banjar Tegenungan in the Sukawati District. The resulting feeling for the brave heart is not unlike walking on thin air.

A leading villager of Blangsinga, I Nyoman Artawa Putra, also on the expert staff of the Regent of Gianyar, confirmed the bridge is scheduled to open in September 2022. The bridge was constructed under the supervision of a Chinese company that has built similar glass bridges worldwide.

Village officials and the Gianyar Regency have prepared supporting facilities for the new glass bridge, including parking lots and widening access roads to the ridge planned for 2023.

Putra said that in 2023 the surrounding roads would be taken over by the Regency and widened by an additional one meter to permit bus travel.

The bridge’s construction is now complete but is not yet open to the public. Still to be finished is a gateway and ticket booth for the bridge that will span the Petanu River. Those using the bridge will enjoy views of the river below and the adjacent Tegenungan Waterfall.