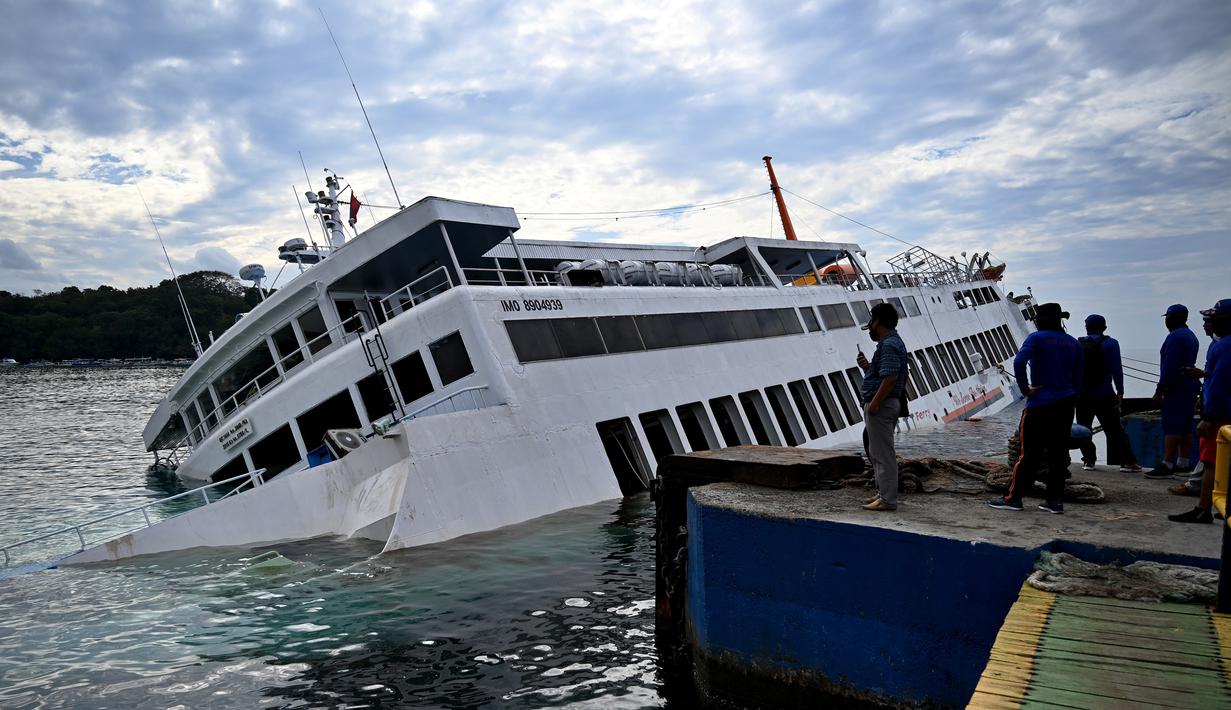 An inter-island ferry, KMP Rucitra III, on a voyage from Lembar, Lombok to Padangbai, Bali began taking on water as is approached Pier #2 at Padangbai, on Friday, 12 June 2020 at 9:50 pm and ran aground adjacent to the disembarkation pier.

The sudden inrush of water on the vessel’s port side caused the 71-meter weighing 855 gross tons ship built in 1989 to list badly as it wallowed in the shallows.

At the time of the incident, the vessel was carrying 70 souls – 40 passengers traveling with vehicles, three pedestrians, seven onboard traders, nineteen crew members, and its Captain Wahyudi.

NusaBali reports that the ship departed Lombok at 5:30 pm. After a journey of 2 hours, while in the middle of the Lombok Straits, the vessel reportedly began to take on large amounts of seawater and list. Five water pumps on board the ferry were put into operation. The pumps malfunctioned a short time later as the ship assumed a severe tilt as it approached Pier #2 at Pandang Bai in East Bali.

Adding to the growing drama, a member of the crew surveyed all passengers on the sinking vessel, asking passengers their names and addresses.

As the ship limped into port, a team under the command of the Port Master (Syahbandar) comprised of Search and Rescue officials from Karangasem, the Indonesian Armed Forces, and Police working at the port on COVID-19 control began evacuating passengers at 11:00 pm. Using a rubber zodiac and several other small boats, all passengers and crew were eventually safely brought to shore.

The Port official said the Captain had calculated that he could reach the pier and, for that reason, did not advise the passengers about the ship’s condition. “He didn’t want to panic the passengers,” explained Suyasmin.

The Captain was reported in a state of severe shock and unable to provide details to officials on the circumstances surrounding the incident.

The assortment of vehicles carried on the ship remain on board, many partially submerged, while waiting for a salvage vessel to arrive at Padangbai.

The grounding of the ship has effectively closed Pier #2, with only Pier #1 remaining in operation. Until the vessel can be moved and Pier #2 put back in service, delays will occur at the Padangbai Embarkation-disembarkation point.