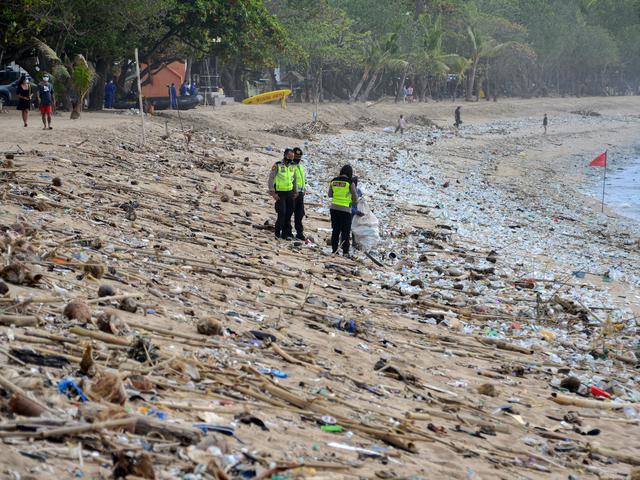 As reported by NusaBali.com, an estimated 70 tons of flotsam trash was deposited on Kuta Beach. On-site observations on Tuesday, 07 December 2021, noted significant abrasion and large quantities of waste stretching from the Hard Rock Hotel to one kilometer to the south in front of the Asam Celagi Cemetery. The trash covering the beach comprised jetsam and flotsam, including trees, bamboo, and plastic trach.

The worst erosion occurred in front of the Kuta Lifeguard Station that nearly undermined the structure’s foundations.

The traditional head (Bendesa) of Kuta Village, I Wayan Wasista, explained that the erosion and landing of trash on the shoreline has been taking place for one week. He said that high waves are an annual occurrence on Kuta beach.

Local officials have reported the latest damage and trash deposited on Kuta Beach to the relevant agencies of the Badung Regency.

As in years past, a large number of dumpsters, front loaders, and clean-up personnel were deployed to restore the cleaner, more natural state of the seafront. Meanwhile, each morning, workers and villagers remove the trash and debris that washed ashore during the previous night, only to see new loads of trash wash ashore by mid-day.

Trucks from the Badung Environmental Service (DLHK) haul away loads of trash and debris, employing hundreds of workers in the process.

Separately, the chief of the Department for the Management of Cleaning Sewerage and Toxic Substances from the Badung Regency’s Environmental Service (DLHK), I Putu Suantara, told NusaBali.com that efforts to clean the beach and haul away materials were impeded to some degree by wave action.

Materials removed from the beach are temporarily accumulated in the Setra Asam Celagi and Camplung areas before being finally hauled away to South Bali’s largest rubbish dump – TPA Suwung.