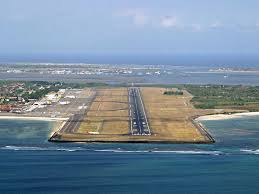 Due to partial lockdown measures in place in many parts of Indonesia and the resulting downturn in domestic travelers, Bali’s Ngurah Rai International Airport has decided to limit its operating hours for what has been Indonesia’s second busiest airport in the recent past.

In confirming the curtailed hours of operation, the general manager of PT Angkasa Pura I in Bali, I Gusti Ngurah Rai Herry AY Sikado, said an official Notice to Airmen (NOTAM – A0363/21) advising of the change had been issued.

Sikado confirmed that reducing operating hours was prompted by the reduced number of airplane movements at Bali’s sole airport.

Before the recent announcement curtailing operational hours, Bali’s airport was open from 7:00 am until 11:00 pm. The new operating hours will maintain the 7:00 am opening hour but close three-hours earlier at 8:00 pm.

The PT Angkasa Pura I general manager explained that Bali’s airport could handle a maximum of 18 aircraft each hour. Recently, the airport has only been serving 10 to 14 aircraft every hour – totals that continue to declines in the current semi-lockdown conditions.