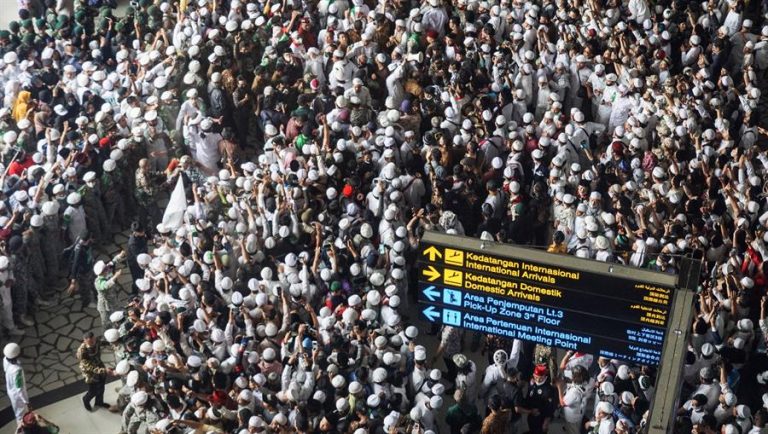 On Monday, 10 November 2020, flights between Bali and Jakarta were disrupted for a period due to gridlock occurring at Jakarta Soekarno-Hatta International Airport linked to the homecoming of Habib Rizeiq Shihab – a leader of the Islamic Defenders Front (FPI).

According to NusaBali, as many as 600 passengers traveling on seven flights suffered delays of up to 3.5 hours.

Stakeholder Relations Manager for Angkasa Pura I, who manage the Bali Airport, Taufan Yudhistira, explained that due to large crowds that descended on Jakarta’s Airport to welcome the FPI leader, several flights between Bali’s Ngurah Rai Airport and Jakarta’s Soekarno-Hatta Airport were delayed.

Flight schedules and operations were back to normal by 2:00 pm.

Garuda Indonesia operated most of the seven flights that were delayed in departing Bali for Jakarta.

Flights from Bali’s airport to all other destinations other than Jakarta were unaffected by the gridlock at Jakarta’s airport that saw roads to and from the Soekarno-Hatta Airport come to a temporary standstill.

Rizieq Shihab returned to Jakarta after an extended exile in Saudi Arabia. He was imprisoned for a period in Indonesia for inciting religious unrest in his continuing commitment to impose Shariah law in Indonesia.

Thousands of his supporters flocked to Jakarta’s Airport on Monday, 10 November 2020, to welcome the controversial fundamentalist religious cleric.