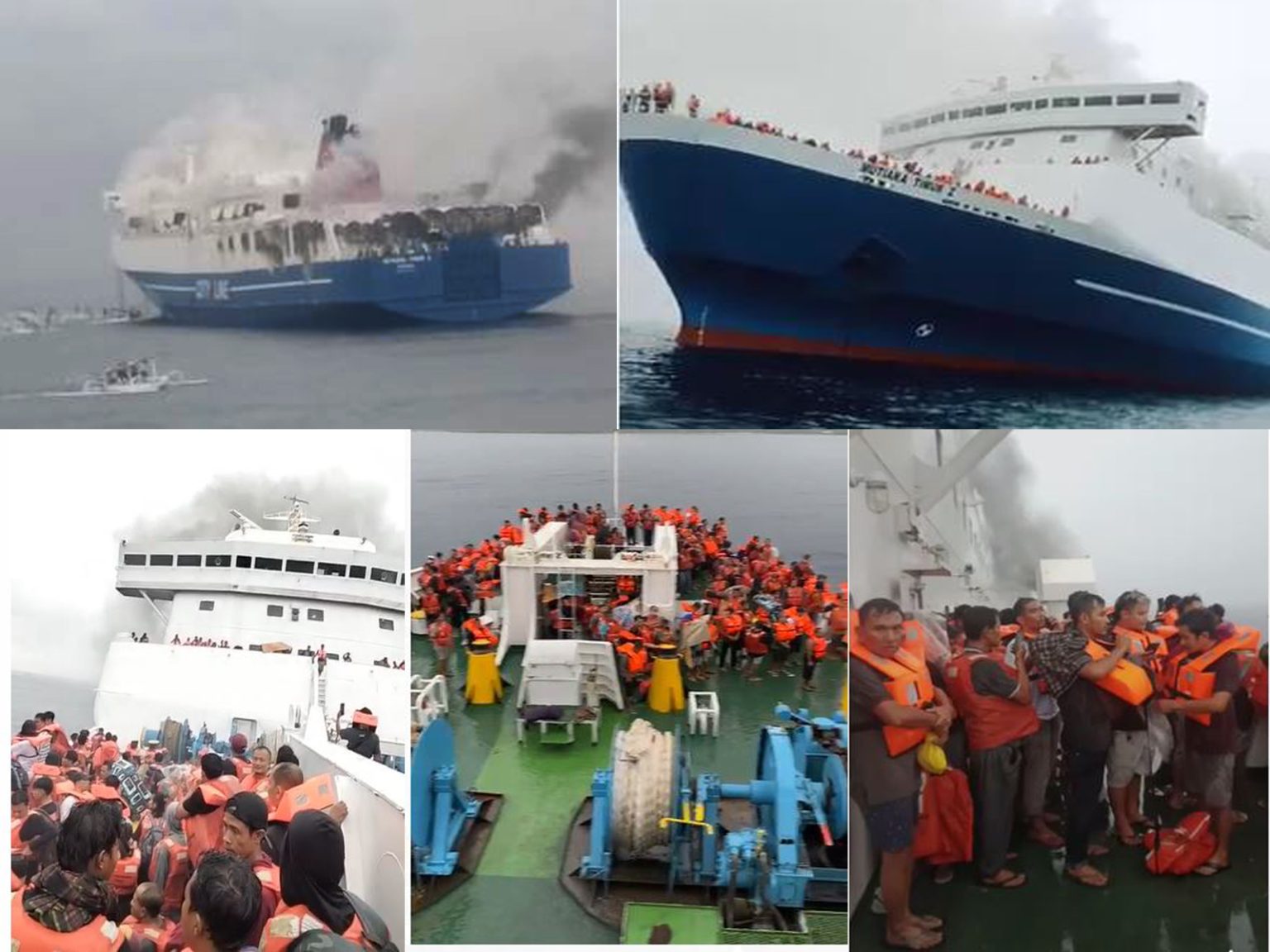 KMP Mutiara Timur I – an inter-island ferry caught fire near Banjar Banyuning in Karangasem Regency on Wednesday at 4:00 pm.

Preliminary reports suggest that a truck carrying industrial chemicals loaded onto the vessel was the source of the fire that quickly spread to all adjacent vehicles. As a result of the blaze, 260 passengers and 35 crew panicked. Some wasted no time and leaped into the sea, where local fishermen rescued them. Others waited onboard the burning ship for evacuation by two navy ships, KAL Kadet 6 and KAL Kadet 7, which quickly came to the imperiled ship’s aid.

KMP Mutiara I is a Ro-Ro/Passenger ferry owned and operated by PT Atosim Lampung Pelayaran. The ship, built in 1991, has a total length of 166 meters and a gross registered tonnage of 11,523. The ship was involved in its regular service from East Java to Lombok – a route it had operated since 2016. Previously, the KMP Mutiara Timur I sailed a route connecting Jakarta and Bandar Lampung, South Sumatra.

The ship was certificated to carry up to 500 passengers, 128 large trucks, and 75 four-wheeled vehicles with a gross weight of 11,523 tons.

The actual load of vehicles and goods abandoned on the ship during the blaze has yet to be released.

At the time of the incident, the ship was sailing to the Port of Gili Mas at Lembar in Lombok.

Nusabali.com quotes a crew member, Yosa Fatrikelo, who said the ship was following along the northern coast of Bali and had just entered the waters off Karangasem Regency, entering the Bali Straits when smoke started pouring out of vents on the deck area. Yosa said the smoke was growing in volume and density when the fire was seen coming from the vents. The ship’s Master, Captain William, stopped the main engines as the 35-crew distributed life jackets to all passengers.

The Captain then issued an “abandon ship order” at a position that was approximately 1.5 kilometers for Banyuning Beach in the Abang District of Karangasem. Some passengers chose to jump into the ocean rather than await the deployment of the ship’s lifeboats.

Two Indonesian Navy Boats (Kadet 6 and Kadet 7) rushed to the scene to board passengers plucked from the sea by local outrigger fishing boats and any remaining passengers and crew still aboard the burning ship. The rescue effort was soon joined by 11 Denpasar Search and Rescue Command personnel using two rigid-back zodiacs. Also joining the rescue effort were two Indonesian Naval Vessels (KRI RE Martadinata-331 and KRI Sultan Hasanuddin-366) who were coincidentally on standby in Bali in connection with the G20 Summit in South Bali.

Passengers and crew were transported by sea to the Port of Tanjungwangi at Banyuwnagi, East Java. Eight people reportedly managed to land ashore in Karangasem, Bali.

Press reports say the blaze consumed and destroyed the passengers’ personal belongings and all motor vehicles on board.

No injuries or fatalities have been reported in connection with the incident. At last report, the KM Mutiara Timur I was still afloat in the waters close to the Karangasem shoreline.

After being left afloat in the Straits of Bali for several days, the crippled ship eventually sunk in waters off Bali’s coast with an estimated depth of 800-1,000 meters. No news has been provided on steps to be taken by the owner/government to prevent further environmental damage caused by leaking fuel from the ship and the hundreds of vehicles now resting on the seabed.