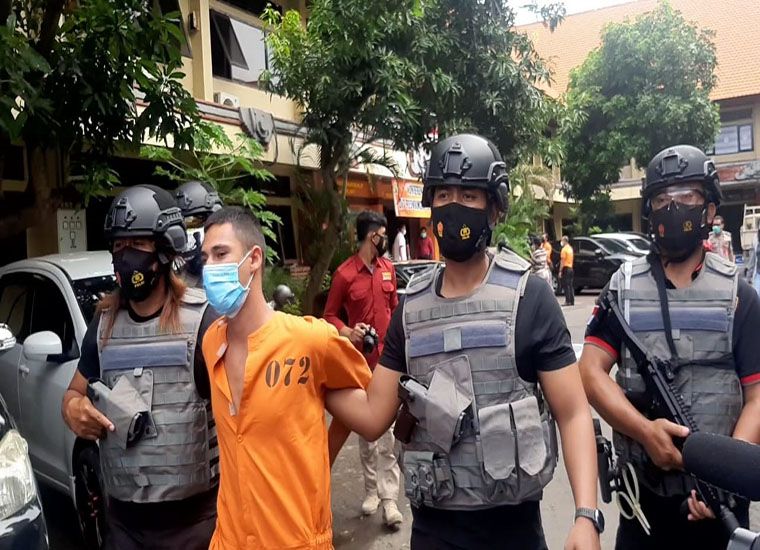 Police in Bali have arrested a Bulgarian, Ilias Danimil Saif, also known as Rehman (20), accused of robbing two Bank Mandiri ATMs on Jalan Uluwatu II in Jimbaran on Monday, 15 March 2021. Police say the man robbed the ATM at 2:30 am.

As reported by NusaBali, Rehman was staying at the Guest House De Rose on Jalan Batu Bolong in Canggu, North Kuta, where police later placed him under arrest on Friday, 26 March 2021.

The head of the Criminal Division of the Bali Police, Commissioner Djugandhano Rahardjo Puro, told the press that Ilias Danimil Saif was a recidivist with a criminal record for skimming ATM units in his native Bulgaria before targeting at least three ATMs in Bali,

The three ATMs in Bali were located at the Pepito Supermarket on Jalan Pratama in Benoa, South Kuta, robbed at 6:00 am on Friday, 12 March 2021. Two hours later, at 8:00 am, the Bulgarian allegedly targeted the Pepito Supermarket in Canggu, Umalas. Later, another ATM on Jalan Seririt in Singaraja, Buleleng, North Bali, was robbed.

Ilias Danimil Saif confessed to police that he has also robbed ATMs in Mataram on the Island of Lombok.

Saif was arrested based on two formal police reports filed with police in Bali on 15 March and 23 March 2021.

When police examined Ilias Danimil Saif, they discovered that he had continually been on the move during his month in Bali, changing his accommodation regularly.

The Bulgarian reportedly used a crowbar to force open the ATM’s card cassette. Because of this crude method, he obtained only Rp. 2.5 million and was unable to access the safe area where the bulk of the cash was held. In some of the thefts, the man also used a skimming device to steal ATM card and password details.

Using CCTV footage and police reports filed by the banks operating the ATMs, police were able to track down the Bulgarian tourist to several hotels and finally to the Jalan Batu Bolong guesthouse where the arrest took place.

In arresting the Bulgarian, police confiscated a crowbar used to pry open the ATMs, the clothing worn when committing the robberies, one handphone, one laptop computer, one skimming unit, a cutter, a hacksaw, and other tools.

Police estimate total losses caused by the Bulgarian’s criminal activities of defrauding ATMs totaled Rp. 87.5 million. Meanwhile, losses caused by skimming are put at Rp. 100 million.  Police are charging the man with breaches of the criminal code punishable by a maximum of 7 years imprisonment