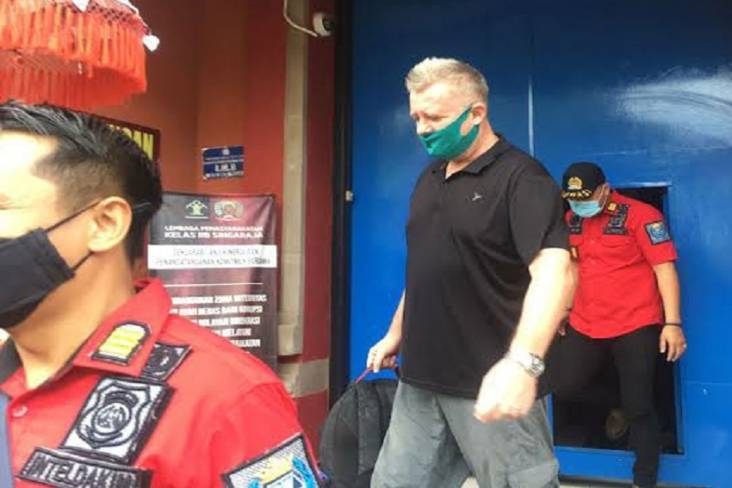 RadarBali.com and iNewsBali.id report that a Danish National, Lars Christensen, was surrendered on Friday, 26 November 2021, by the Singaraja North Bali Prison to officials at the Immigration Detention Center in Denpasar to await deportation.

Christensen had completed his seven-month prison term in Singaraja after being found guilty for desecrating a Hindu religious monument. The case against the Dane dates from a police report filed by his former wife, Luh Sukerish, who said Christensen had damaged on 15 October 20 two pelinggih – Hindu religious monuments common to many Bali family compounds on 15 October 2020.

His altercation with his former wife and the destruction of the monuments were publicized virally on social media.

At trial, Christensen told the Court he did not know that the two damaged pelinggih at the family home in Kalibukbuk Village, North Bali represented sacred symbols of the Hindu religion. He said he destroyed the monuments in the belief that his former wife was using the objects to practice “black magic” against him.

Before his trial and conviction, Christensen had apologized for his actions and repaired the two damaged pelinggih.

As part of the handover process from the prison department to immigration, Christensen was given a medical examination to facilitate the deportation process.

Christensen was sentenced to prison for seven months after being found guilty of defaming religious monuments in Bali. The head of the Bali office for the Ministry of Justice and Human Rights, Jamaruli Manihuruk, confirmed the imminent deportation of the Dane. Manihuruk ordered that the Immigration Detention Center take steps with the Danish Embassy to secure a plane ticket back to Denmark. Manihuruk added: “Although he is now free, the man was not delivered to his family in Bali. Instead, he was placed in the Denpasar Immigration Detention Center to await deportation.”

According to Immigration Officials, Christensen is being deported under the authority granted to them to deport foreigners deemed to represent a threat to public order and safety and who have been determined to be lawbreakers.

The head of Bali’s Justice Ministry Office said that the Danish citizen has the right to appeal his deportation directly to the Minister of Justice and Human Rights.