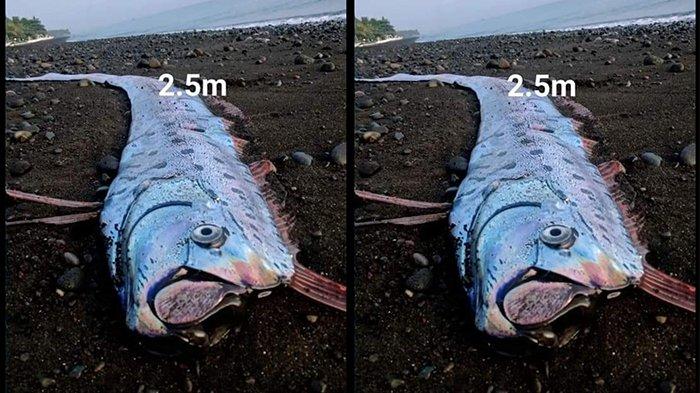 Sometimes identified as a “serpent fish” or “long herring,” the Oarfish is found in almost all the world’s oceans, excepting Polar Regions’ waters.

The longest known fish, the Long Herring Oarfish, has a red-colored dorsal fin that extends the full length of its body and a long, thin pelvic fin. Among its most distinctive features, the Oarfish is silver-colored and has dark Dalmation-like spots.

Often referred to by seafarers as a “Dragon Fish,” the Oarfish remains in deep waters and are seldom seen in shallow, coastal areas. Research shows that the natural habitat of the Oarfish is in the epipelagic to mesopelagic ocean layers that range from 200 meters to 1,000 meters below the sea’s surface.

Widespread folklore in the globally diverse locations in which the Oarfish is found is linked to shared superstitions that this species’ appearance portends an impending threat of earthquakes and tsunamis.

Quoted by RadarBali, a local social media account owned by @Gede Sutapa proclaimed: “If the Oarfish appears, it is usually a sign of a (coming) disaster such as an earthquake/tsunami – at least that’s what I read in Google. May the Eath always be in the Almighty’s care.”

A Facebook Account from Bali @Andika wrote a similar concern: “The Oarfish is often associated with natural disasters in the oceans and earthquakes.”

The discovery of the seldom-seen Oarfish in East Bali was confirmed by the Head of the Kubu Police Precinct. Police Officer I Nengah Sona, who says a local man, I Gede Astika, found the dead fish and uploaded its picture to his Instagram Account @AstikaBeach.

Additional reporting by Bali Post says the fish measured 2.5-meters long – a substantial length but much less than the maximum known size of the Giant Oarfish at 8-meters. Sutapa photographed the fish and searched Google to help identify the species. Local citizens in East Bali were startled to learn that historically the discovery of this species in coastal areas of Japan and Palu, Indonesia, was linked to subsequent devastating earthquakes and tidal waves.

The mythological connection to disaster of Oarfish sightings was strengthened when, from December 2009 to March 2010, a large number of Slender Oarfish (Regalecus russelii) washed up on Japanese beaches. The Japanese name for the Oarfish is “Ryūgū-No-Tsukai” or “Messengers from the Sea God’s Palace” – believe to be omens of coming earthquakes. The Fukushima Earthquake and Tsunami of 2011 that killed more than 20,000 people are linked by many to the foreboding myth of the Oarfish.

Scientists, including the Indonesian Agency for Climatology, Meteorology, and Geophysics (BKMG), discount reports linking the occasional beachings of Oarfish to imminent seismic disaster. Shrouded in mythology and tales of sea serpents, these elongated fish will sometimes wash ashore as sick or dying Oarfish floundering near the ocean’s surface are swept landward.

Commercial fishermen do not highly regard the Oarfish. The flesh of the fish has a gelatinous consistency that is generally seen as unpalatable.