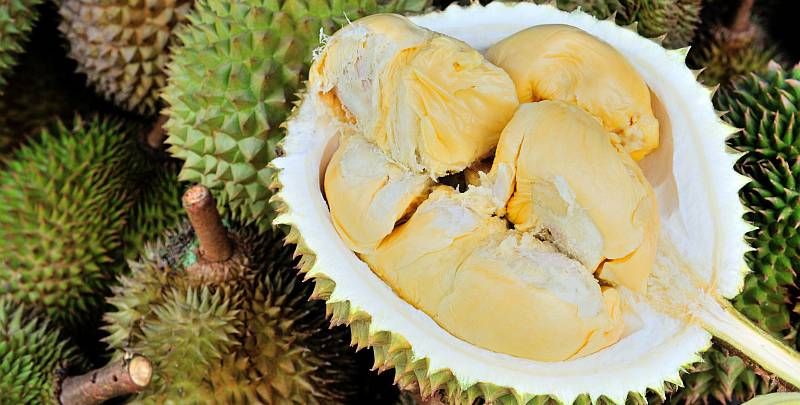 It’s that incredibly fragrant time of the year in Bali.

Roads crisscrossing the island are punctuated with pickup trucks filled with these prickly “King of Fruits” – large spiked delicacies with a thorn-covered rind. When durians occasionally fall from a tree and strike a hapless pedestrian, it can have fatal consequences similar to being dispatched by a deadly blow from a medieval mace-like bludgeon.

“The Marmite of fruits,” most people either love or hate the pale-colored prickly proposition of nature. But those purchasing durians are doing so not for use as a weapon but because of the fruit’s distinctive smell and flavor. Described by some as “smelling like hell” but “tasting like heaven,” the fruit’s detractors have alternatively described durian as tasting like rotten onions, turpentine, or even raw sewage. The famed British naturalist who spent long periods in Bali and adjacent parts of Indonesia, Alfred Russel Wallace, rendered a more charitable appraisal of Durio Zibethinus. Wallace said the flesh of the fruit tasted like “a rich custard highly flavored with almonds.”

As reported by Tribun-Bali.com, reflecting both a depressed local economy and this year’s bountiful harvest, durians in some locations in Bali are selling for the unprecedented low price of only Rp. 10,000 each.

A fruit seller, Agung Setiawan, who peddles durian on Jalan Gunung Rinjani in the Monang-maning sub-district of Denpasar is selling durian at prices starting for Rp. 10,000 each. Agung says he can sometimes sell as many as 300 durians in a single day, managing, however, on most days to sell an average of 100.

Depending on size, ripeness, and pungency – high-end durians are this year selling for as much as Rp. 50,000 apiece.

Bali News, Durian, Price of a Durian in Bali, Taste of Durian