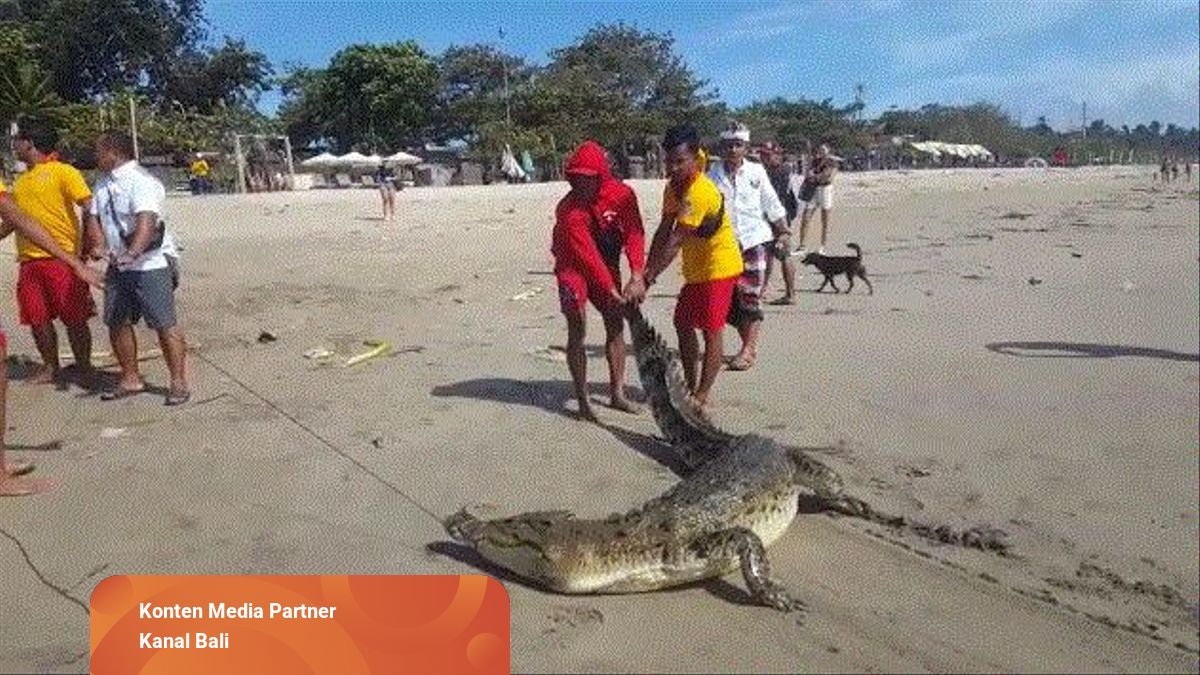 The State News Agency Antara and Bali media outlets are awash with the news of the capture and evacuation of a 3-meter-long crocodile on Legian Beach mid-day on Wednesday, 04 January 2023.

The Chief (Lurah) of the Legian Community, Ni Putu Eka Martini, commented: “At this time, the crocodile has been evacuated by a team from the Agency for the Conservation of Natural Resources – Bali (BKSDA-Bali). Legian Beach is now safe and secure and can be visited by international and domestic tourists.”

She said the crocodile was initially spotted by an on-duty member of Bali’s Lifeguard Brigade (Balawista). To protect swimmers and the local population, lifeguards working with local community members took the initiative of evacuating the giant reptile using makeshift tools available on site.

Before its capture on Wednesday, Mogik Pyantara, a lifeguard assigned to the Legian Beach Lifeguard Station, explained that the crocodile was initially thought to be a flotsam log shifting to the shoreline carried by sea currents. Closer observation identified the “log” as a living, moving crocodile. At this point, an initiative was launched to capture and isolate the animal.

Pyantara commented that the capture process was complicated because no one had any practical experience in handling a dangerous crocodile and the limitations of working with makeshift pieces of wood and ropes to snare the large reptile. A further complication to capturing the crocodile was that the shoreline and adjoining waters were filled with swimmers and surfers.

Following the capture, officials from BKSDA-Bali are calling on the public and water sports operators to be on the lookout for additional estuarian saltwater crocodiles (Crocodylus porosus) in the Legian Beach area.

Official report this is the first time a crocodile has been spotted and captured off Bali’s waters.

The chief of BKSDA-Bali, R. Bagus Budi Santoso, confirmed the rescue and evacuation of an estuarian saltwater crocodile by lifeguards working on Legian Beach at about 3:30 pm and its subsequent removal to a secure conservation area for crocodiles in Tabanan.

No one suffered any injury in the capture and relocation process.

The crocodile captured on Legian Beach has been identified as a male, measuring 3 meters in length, with an estimated age of 4-5 years. Official theorize the reptile may have originated from the nearby Ngurah Rai Mangrove Conservation Reserve. Officials cannot confirm if the crocodile is a reptile endemic to the area or possibly a pet abandoned in the ocean.

Officials assure the public that there should be no fear for those desiring to swim or surf off Legian Beach.

Salt Water Crocodiles exist in many areas of Indonesia, including the coastal regions of East Nusa Tenggara. Crocodile sightings in Bali are, however, very rare.

Saltwater crocodiles have a wide geographical range. For instance, an increase in crocodile populations in Timor-Leste (East Timor) and growing reports of fatal attacks on coastal fishermen are linked to the migration of the reptiles from northern Australia to Timor-Leste, where locals are reluctant to cull the animals widely considered mythological deities.

After A While, Crocodile