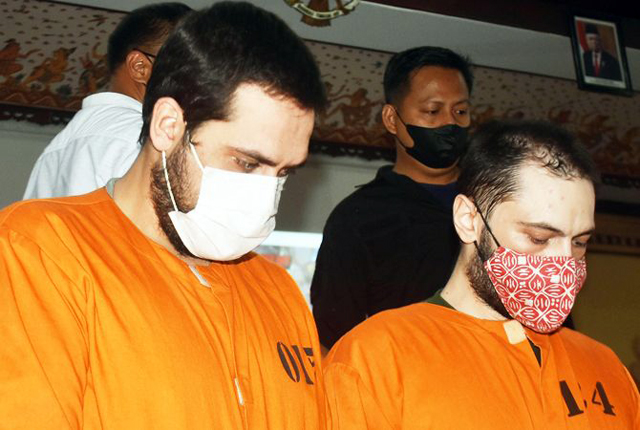 The duo were arrested on allegations of illegal confinement, robbery, and threats committed against an Italian couple that caused losses amounting to Rp. 5.8 billion.

Disanto and Simpson allegedly robbed Principe Nerini (40) and Camilla Guadagnuolo (30) – a husband and wife couple, at 3:00 am on 11 November 2021 while the victims stayed at Villa Seminyak Estate and Spa Royal B on Jalan Nakula, Gang Baik Baik in Seminyak. The two charged with the crime were arrested by police later on the same day as the robbery.

The head of the Denpasar Police Resort, Commissioner Jansen Avitus Panjaitan, told the press that Nicola Disanto was arrested by police while traveling in a vehicle in Kerobokan at 6:00 pm on 11 November. Meanwhile, Gregory Lee Simpson was arrested four hours later at 10:00 pm on Jalan Setiabudi in Kuta.

Officer Jansen said that based on the results of a continuing investigation, four people were involved in the robbery of the Italian husband-wife team. All four of the robbers are said by police to be foreign nationals, with the remaining two still sought by police.

Jansen also revealed that one of the two people now in custody, Nicola Disanto, is a former employee of an export company operated by the victims. Police say that the assailants dressed entirely in black during the villa attack covered their faces with scarves and wore gloves to hide their identities.

Police described how the robbery at the Villa Semiyal Estate and Spa Royal B saw Principe Nerini threatened at knifepoint while the assailants bound his hands and feet. Principe says he was beaten and locked in a bedroom during the robbery and confinement.

Once Principe was rendered powerless by the intruders, six handphones were taken. Also, reportedly under the threat of death, Principe was forced to provide the passwords for his bitcoin accounts.

During the robbery, Principe’s wife, Camelia Guadagnuolo, returned to the villa and was subsequently detained and threatened by the robbers.

Once the robbery was completed, the four perpetrators fled the scene.

After freeing themselves, Principe and Camilla checked their bitcoin account balance to discover funds in the amount of Rp. 5.8 billion had been transferred in three transactions to an account owned by one of the assailants, Nicola Disanto.

Nerini and Guadagnuolo reported the attack and the theft to the Kuta police, who immediately launched an investigation. Two of the four perpetrators were arrested less than 24 hours after the incident based on the evidence in hand. During the arrest, police also seized two knives, a jacket, a pair of trousers, and cash as evidence. Police say that Nicola Disanto and Britain Gregory Lee Simpson told police that the robbery had been planned. Police theorize the robbery was done in possible retaliation by Nicola against a former employer, Principe.

Police say Nicola Disanto and Gregory Lee Simpson are charged under the criminal code with robbery, punishable by up to 9 years in prison.