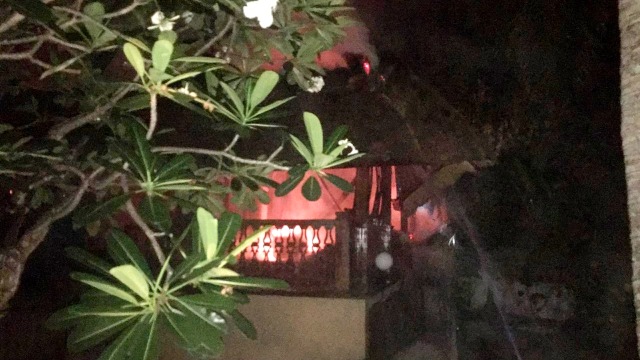 As Radar Bali reports, the blaze began on the 2nd floor of the  Kampung Suite at the hotel located on Jalan Batu Bolong No. 214, in Banjar Canggu, North Kuta.

While there were no injuries reported in connection with the fire, estimates put the damage to the single villa at the Resort at approximately Rp. 1.5 billion.

Police say the fire destroyed the 12 x 8-meter two-story building, the antique collection of furniture used to furnish the suite, a 42-inch television, three air conditioning units, and other furnishings.

Police and fire department officials continue to investigate the fire believed to have been caused by a short circuit.

Six fire trucks responded to the scene and successfully prevented the blaze’s spread, managing to extinguish the fire in about one hour.

Bali Express quotes the assistant manager of the Hotel Tugu, Wayan Suardana, who said he was uncertain of the cause of the fire that was fanned by strong winds.