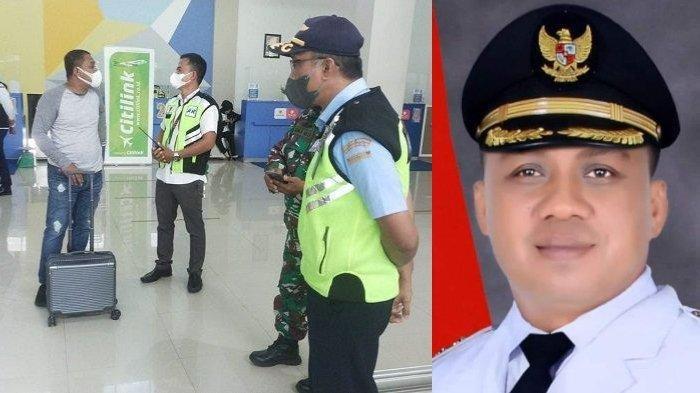 “Jokingly” referring to bringing a bomb on board a Wing Airs Flight (IW-1307) at Betoambari Airport in Baubau, Southeast Sulawesi, on Tuesday, 14 June 2022, La Ode Arusani, the former Regent of South Buton, was booted off the flight.

As reported by Kompas.com, La Ode Arusani was handcuffed and unceremoniously led to the airport police post to undergo questioning. The head of the Baubau Police Precinct, AKBP Erwin Pratomo, told the press that when he heard of the incident, he immediately ordered his officers to apprehend the former regent and subject him to questioning.

The denied boarding event happened when La Ode Arusan was preparing to fly on Wing Airs from Baubau to Makassar. Traveling with a heavy piece of hand baggage, Arusani was told by the stewardess to place his bag in an area of the airplane designated for luggage. In what he now insists was a “playful” response, La Ode Arusan said there was no need to worry as the bag was only filled with “bomb soap” (sabun bomb). Upon hearing the word “bomb” and following established procedures, the stewardess informed the Captain Pilot of the former regent’s statement, which threatened the flight’s safety and welfare.

La ode Arusani was immediately taken into custody, removed from the plane with his baggage, and brought to the nearest police post in handcuffs.

Pratomo later confirmed that once satisfied the regent was not carrying an explosive, La Ode Arusani made a written apology to the Airline.

Despite a written apology, La Ode Arusani was forbidden from continuing his journey and subsequently allowed to return to his home.

The Corporate Manager for Strategic Communication for Lion Air/Wing Air, Danang Mandala Prihantoro, said, “based on a preliminary interrogation, the passenger claimed he was only joking.”

Because of Ode Arusani’s joke, all the plane’s passengers were disembarked with their accompanying luggage.

Following an inspection of the plane, the passengers, and their luggage – the four crew and 71 passengers were reboarded. The flight was finally allowed to depart at 9:52 am, landing in Makassar at 10:48 am, minus the errant “joking” former regent.

If Lion Air or one of the passengers on the flight subsequently chooses to make a criminal police complaint against La Ode Arusani, he could face up to 8 years in prison under Section 437, paragraphs 1 and 2 of the 2009 Aviation Law.

Wing Air is a subsidiary of the Lion Air Group, Indonesia’s largest Airline.