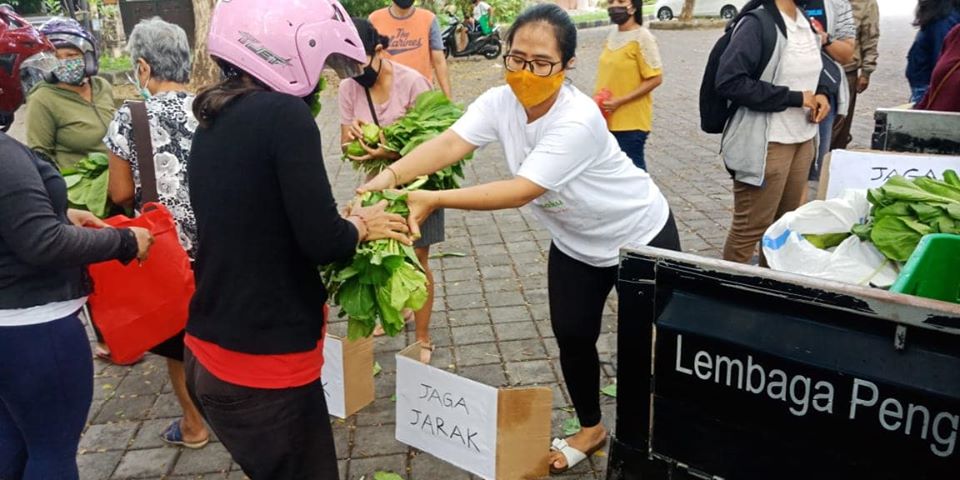 As reported by NusaBali.com, The Puputan Square in downtown Denpasar, Bali was home to an unusual scene on Saturday, 23 May 2020, when members of the public stood in lines to receive free produce distributed by a group calling itself “Daridesaku” (“From My Village”).

Large bunches of several kinds of vegetables were distributed without charge to residents, some of whom are in dire need of food aid.

The work of Daridesaku provides social support to help both the general public and farmers in Bali who, according to the group, need help in distributing their produce. Ida Bagus Mandhara Brasika, the founder of Daridesaka, said: “In the end, we met with the farmers who had so much produce that was not being sent to market and at risk of going to waste. On the one hand, the public needs food. Our local products are of good quality, with high fiber, but, unfortunately, the products are not being absorbed by the market.”

In distributing the free vegetables, Daridesaku cooperates with farmers from Bengkel in Tabanan Regency and Pelaga in Badung Regency. Using cash donations submitted to them on OVO and Gopay, the group mobilizes the money to purchase produce from farmers. By encouraging system of routine donations, Daridesaku plans to repeat their distribution of free food to the public on a weekly basis.

Seen from another perspective, the food donation program can represent a mild for of protest against the the Municipality of Denpasar‘s policy of limited public movements (PKM) . “At this time, while PKM is in effect in Denpasar, there is no formal program to meet the basic needs of the public. We want to protest this but in a form of more elegant protest by distributing the food produced by farmers,” explained Mandhara Brasika.

On 23 May, Daridesaku distributed 180 kilograms of choy sum, 70 pieces of chayote, and 70 bundles of pumpkin fronds. The entire amount was carried quickly away by members of the public in just 15 minutes.

Because many people had been waiting for some time to get a share of the free food and the speed with which the produce was carried away, has prompted Daridesaku to devise a system of queuing that respects the principles of physical distancing and also honors guidelines set forth by the municipal government of Denpasar.

In the future, Daridesaku will seek other needy recipients, including orphanages and homes for the blind in Bali. Mandhara believes the people who come to their produce giveaways are local residents in genuine need of food aid.