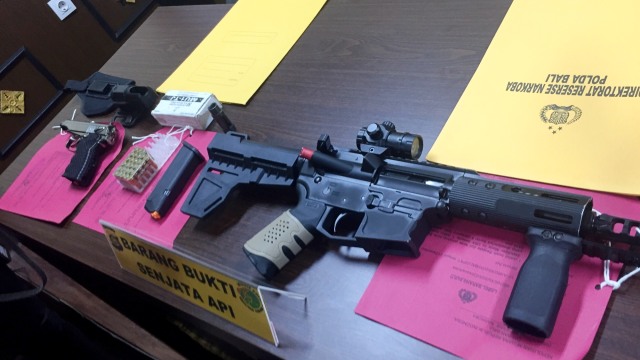 A French citizen, Rayan Jawad Henri Bitar (30), is on trial in Bali for the possession of methamphetamines, three firearms, and 29 rounds of ammunition punishable by up to 20 years in prison. During an online criminal court proceeding held in Bali on Tuesday, 04 May 2021, State Prosecutors leveled four separate criminal charges against the defendant Bitar.

As reported by NusaBali, Bitar is charged under sections 114, 112, and 127 of the National Narcotics Law and section 1 of the 1951 Emergency Law on the unauthorized possession of weaponry.

The defendant’s defense team voiced no objections to the charges presented to the Denpasar District Court, thereby permitting the trial to proceed with the presentation of evidence and the calling of witnesses.

Rayan Jawad Henri Bitar was arrested at 7:30 pm on 21 March 2021 at Villa Kharisma – his residence in North Kuta with 4.81 grams of shabu-shabu or methamphetamines. The French national said he acquired the narcotics from a man named Mang Adi after ordering them via a WhatsApp link and transferring Rp. 800,000.

Despite having the WhatsApp number and bank details of Mang Adi, police have been unable to locate or arrest the man alleged to have sold the drugs.

Bitar told the court that he had been an active narcotics user since 2009 used to calm himself and fuel his creativity.

Following his arrest for drug possession, police searched the man’s Bali residence, where they discovered the three firearms and ammunition. The guns found by police were a long-barrel Blade Stabilizer Pistol made in the USA with a magazine for eight rounds; a box of MUI-TJ 9×19 mm bullets; one NAA 22mm Revolver holding one round of ammunition; and one Russian MAKAROV 7.65 mm caliber pistol.

The trial continues in the Denpasar Court.