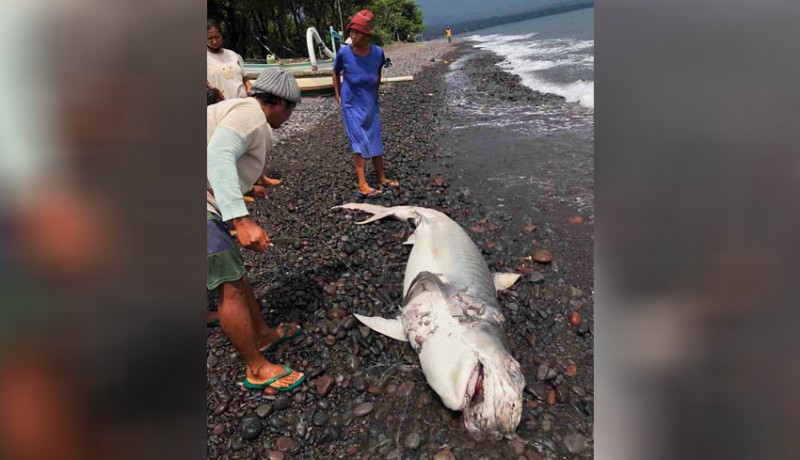 Anyone who is a fan of the “JAWS” film franchise might find cause for concern with news published in NusaBali showing the carcass of a great white shark identified by its scientific species name as (carcharodon carcharios) that washed ashore on Amed Beach, Bajar Lebah, in Karangasem on Thursday, 04 March 2021 at 10:00 am.

The dead shark’s state of decay led observers to conclude that the predatory fish had been dead for at least three days. Because of the resulting stench, local fishermen tied ropes around the shark to pull it into deeper waters to sink it.

The great white shark, infrequently seen in Bali’s waters, was first spotted in front of the Ganesh Bungalow in Amed by I Ketut Martana, a fisherman from Banjar Buayang . The dead white shark measured 2.15 meters long for a shark species that can average between 3.4-4 meters. The dead shark had a diameter of 30 centimeters.

More commonly found in cooler waters, such as off Australia’s coast, where surfers and swimmers are occasionally attacked ferociously by the great white shark. One of the longest-lived cartilaginous fish, a great white shark, can live up to 70 years, with males only becoming sexually mature at 26 years and females at 33 years.

The great white shark is recorded as the shark species logging the greatest number of unprovoked attacks on humans, some of which prove fatal.

Despite its reputation as a “killer” due to the Peter Benchley novel “Jaws” and the Steven Spielberg film series by the same name, the great white shark remains a protected and threatened species under many international and national laws.

Again, great white sightings in Indonesia are infrequent but could possibly be on the increase due to the effects of climate change. The great white sharks prefer waters with a temperature range between 12 and 24 degrees centigrade. Globally, these sharks’ greatest concentration is in the northeast United States and California, South Africa, Japan, Oceania, Chile, and the Mediterranean.