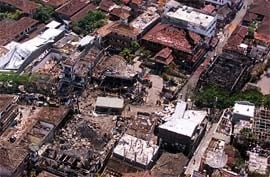 Encep Nurjamin, more commonly known as Hambali, a former operative of the terrorist group Jemaah Islamiyah (JI) that took a central role in the 2002 Bali Bombing, is finally being brought before a court of law after spending 18 years in prison, mainly at the infamous Camp Guantanamo in Cuba.

As reported by Beritabali.com, Hambali (58) is standing trial in connection with the bombing together with two Malaysian nationals. The trial commenced with the reading of the formal charges in what is a formal military-styled judicial proceeding.

The trial is the first time the leadership of JI, represented by Hambali and the two Malaysians, have been brought to trial before the law. The three are charged with premeditated murder, criminal conspiracy, and terrorism. The Guantanamo trial is the first step in bringing Hambali and his cohorts to answer what promises to be an extended and complicated legal process.

Hambali, together with Mohammed Farik bin Amin dan Mohammed Nazir bin Lep, before their imprisonment in Guantanamo, were held in various “black-site” secret prisons operated by the US Central Intelligence Agency (CIA).

The case presented to the military-style tribunal was prepared for trial by the US Department of Defense during the presidency of Donald Trump. Attorney Brian Bouffard, who represents Nazir bin Lep, claims that the prosecution makes problematic any pledge by US President Joe Biden to close Guantanamo. The US base in Cuba still houses 39 of some 779 people incarcerated in the US war on terror.

Bouffard says the current trial will prevent the US government from placing the three accused men on a list of prisoners subject to relocation or repatriation to their home countries.

The legal counsels for the three men are seeking to prolong the trial process, citing a lack of access to suitable translators and other facilities they consider necessary to the men’s defense.

In the opening trial sessions, a panel of civilian and military judges will hear arguments on behalf of the accused on whether or not the trial should be allowed to proceed.

When the case eventually comes to trial, the US will present evidence showing that Hambali is a former leader of Jemaah Islamiyah, who the Taliban and al Qaeda trained. He is also accused of recruiting guerilla fighters, including Nazir bin Len and Farik bin Amin, to undertake terrorist attacks.

At trial, it will be alleged that Hambali and his associates, with the assistance of al Qaeda, helped execute the bombing of Paddy’s Pub and The Sari Club in Bali on 12 October 2002. They are also accused of involvement in bombing the JW Marriott Hotel in Central Jakarta in August 2003. Moreover, Hambali is linked with attacks on several Christian churches in seven Indonesian cities at the end of 2002.

Living in Malaysia under the assumed name of Riduan Isomuddin, Hambali is accused of funding a bomb attack on the home of the Philippine Ambassador to Indonesia on 01 August 2000 and the bombing of the Atrium Senen on 01 August 2001.

The attacks in Jakarta and Bali killed 213 and injured or maimed hundreds of others. The two Malaysians are accused of facilitating the transfer of funds that paid for the terrorist attacks.

The three men were captured by the CIA and Thai Police in Bangkok in 2003 and then isolated in “black sites” in 3rd countries operated by the CIA. A US Senate Intelligence Committee report prepared in 2014 says the men were subjected to torture and brutal interrogation methods. In 2006, the trio was flown to Guantanamo.

Past efforts by the men’s legal representatives to be brought before a Court was opposed by the US Pentagon on a proclaimed need to protect national security interests.

Legal experts are questioning the secrecy constraints imposed on the coming trial, the use of torture in the compilation of evidence, that Indonesia has already tried and convicted the defendants in absentia, and the unusually long period the three have been detained without trial.

In a similar case involving detainees at Guantanamo, those charged with terrorism continue to face an indefinite period of imprisonment without trial. Five defendants charged with helping to plan the 11 September 2001 attack on the World Trade Center in New York remains in detention awaiting trial, despite being formally charged by US prosecutors in May of 2012.

As reported by Suara.com, Christine Funk, the attorney for Farik bin Amin, predicts that her client’s trial will involve a long and protracted process needed to gather witnesses’ statements and physical evidence. She added that her client is nervous and wished the litigation process to take place so he can return to his home.