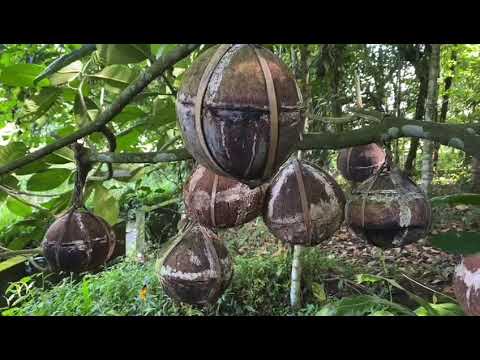 From the Bali “X-files.”

In the Balinese Village of Bayung Gede in Kintamani District near Bangli, the local residents have a time-honored tradition of suspending a newborn’s placenta from the trees standing in a nearby cemetery. ‘Ari Ari” is the Indonesian language equivalent of afterbirth or placenta, and the cemetery or “Setra” used for this cultural tradition is called the “Setra Ari Ari.”

This ritual, known as “Ari-Ari Mengantung” or “Hanging Placenta,” was recently honored by Indonesia’s Ministry of Education and Culture by being included in October 2020 among the Republic’s catalog of Intangible Cultural Heritage items (WBTB).

As suggested by its name, this unique local practice entails hanging the placenta of a newborn child encased in an empty coconut shell in the Kayu Bungkak trees found at the village cemetery.

As reported by NusaBali, the local belief is that hanging the placenta of a newborn in the graveyard imparts magical protection on the associated child from illness and other misfortunes.

The cemetery with hundreds of hanging coconuts is a regular stop for visitors to the Village of Bayung Gede and the surrounding areas.

The head of traditions and culture at the Bangli’s Tourism and Cultural Department, Putu Candra Rahadi, explained how the elevation of the “Hanging Placenta” tradition to the list of Intangible Cultural Heritage items took place after a lengthy nomination and approval basis.

Following the “hanging placenta” tradition’s nomination by Bangli’s Tourism and Culture Department, a period of investigation, verification, and assessment followed. The final “hearing” before confirmation of WBTB status was held on 29 September 2020.

In granting the Intangible Cultural Heritage Designation on the Hanging Placenta Cemetery, the Indonesian Government seeks the support and commitment of the surrounding community to preserve and protect this sacred tradition.