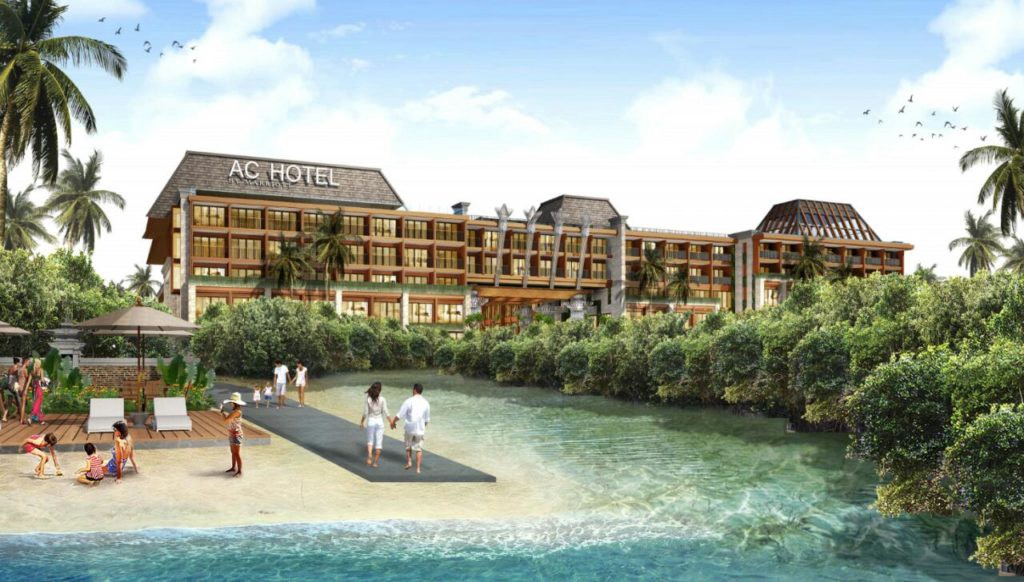 The Lavaya Luxury Residence and Resort – Radar Bali reports a luxury condominium and villa project located on a 2.1-hectare site on the Tanjung Benoa Peninsula in South Bali is depositing sand on an adjacent beach to create an illegal private beach.

The project contractor, Ardhi Persada Gedung, is reported by Radar Bali as “claiming” they will also manage the adjacent protected mangrove area.

Under current law in Bali, all beach areas area to a distance of 100-meters from the high-water mark are public domain and cannot be claimed for private use or be used to construct any permanent structures. The mangrove areas of Benoa Bay are protected conservation areas and, as such, cannot be disturbed by private developers.

I Nyoman Parta, a member of Commission VI from the Indonesian House of Representatives (DPR-RI) and a member of the PDI Party, scolded the developers of the Lavaya Project in Nusa Dua on Monday, 25 July 2020, telling them not to act with impunity with land in Bali. Parta cynically aksed: “Private beach? Did your ancestors own this land?”

Parta told the press that he had sent photographic documentation to the Regent of Badung, Nyoman Giri Prasta; the Deputy-Regent, Ketut Suisa; and the Chairman of the Badung House of Representatives (DPRD-Badung), Putu Parwata. He called on the Regency’s executives and lawmakers to reprimand the company currently building the Hotel Lavaya and ensure that all local laws are rigorously followed.

The national Legislator also questioned the construction of the 5-storey Hotel Lavaya when Bali zoning and building laws stipulate that no building can stand higher than 15-meters. Showing the pictures of the tall hotel to the press, Parta proclaimed, “I took this picture on Sunday, 26 July 2020.”

Parta said he was sharing the pictures with the public so that the Balinese take an active role in safeguarding the Island’s beaches. “Do not let the beaches become the private zone of hotel owners or the guests using the hotels,” he said.

“Do not let the beaches become the private zone of hotel owners or the guests using the hotels.”

Parta characterized the case of The Lavaya Luxury Residence and Resort as an incident of Bali being “sold cheaply” due to television advertisements in Indonesia offering managed units at low prices with down payments of only Rp. 6 million. “This is sad in the midst of the Bali Provincial Government’s efforts to design quality Balinese tourism after the Covid-19 pandemic,” lamented the Bali-born national lawmaker.

Parta called for a rapid, transparent, and final resolution of the case. He said many hotels and resorts in Bali bars and eject locals from their beaches, claiming private ownership of beachfront that is public domain. Adding: “This often happens. Seven months ago, I protested a similar case involving a villa in Tabanan (West Bali).”

He also cited cases in various areas across Bali, including tourists staying on the beaches in north Bali at Buleleng, on sacred mountains, and along rivers that violate set back rules from oceans, waterways, and Bali-Hindu religious sites.

The Legislator said that Bali’s tourist projects and activities cannot trespass into areas and right-of-ways needed for religious ceremonies and rituals.

Parta also suggested that all beaches in Bali should use only Balinese names to remind all involved that the people of Bali own the beaches.

Parta said: “I am asking that the Lavaya Hotel owners remove the metal poles they have installed on the beach and immediately halt illegally promoting the beach site as a ‘private beach.'”

Separately, Parta called on the traditional chief (Bendesa Adat) of Tengkulung in Benoa to follow up discussions held on Sunday, 26 July 2020, insisting that the name of the beach opposite the Lavaya Luxury Residence and Resort return to its original name – Pantai Telaga Waja.

The website for the Lavaya Residence and Resort shows that AC Hotels Marriott manages the property.