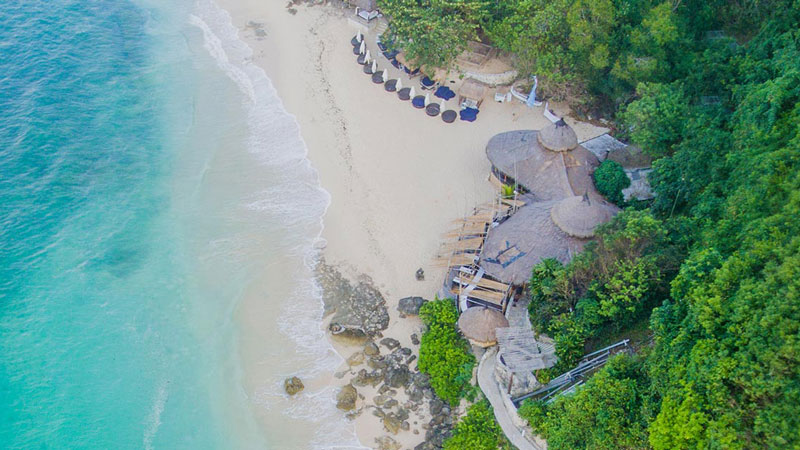 A case of suspected misappropriation of a seaside parcel of public land by seven investors on the Ungasan Peninsula, South Kuta, that surfaced after a fire at the Karma Kandara Restaurant on a “private beach” on Sunday, 14 November 2021, is back in the news.

The alleged unauthorized use of public lands has surfaced again following a report in RadarBali.com and reports from a team of attorneys led by I Wayan Gede Mardika representing the Badung Regency Enforcement Agency (Satpol PP Badung). Mardika says that seven investors had contracted the land used to build the restaurant from the elders of the surrounding traditional village.

As reported by RadarBali.com, the case involving violations of setback zoning rules from the highwater mark and the possible unauthorize expropriation by the traditional village renting public lands to private parties came to light after a fire devastated the Karma Kandara Private Beach Club in November 2021.

Regency officials discovered legal and procedural irregularities when they visited the burnt ruins of The Karma Kandara Beach Club following the fire.

When enforcement officials were quizzed on how the long-standing and popular Beach Club escaped scrutiny in the years preceding the fire, the Satpol PP said in defense that access to the site was only discovered when a private road suddenly opened to allow firefighters to respond to the fire. Once access was secured, officials found zoning, licensing, and other legal anomalies involving the destroyed luxurious restaurant and several other adjacent buildings.

Subsequent investigations and crosschecks performed by the Satpol PP team found proof, including a notarial act, showing that public land had been leased to a private party.

Badung Regency attorney, I Wayan Gede Mardika, accompanied by the Regent of Badung, I Nyoman Giri Prasta, and the Head of the Badung Enforcement Agency, IGAK Suryanegara, visited the Denpasar Police Headquarters pm Tuesday, 22 March 2022. That meeting was to follow up a report they filed with the police (Number 40/I/2022/Denpasar Police) on 13 January 2022. Explaining the visit, Mardika said: “This is a private location. After we checked, the building was not licensed. Therefore, it was reported to the police.”

The Regent of Badung, Giri Prasta, told RadarBali.com that his administration would not provide licenses and permits to companies that break the law, such as the case in the current instance where seven investors have expropriated the public beach area in Ungasan. The Regent added: “It is not possible that the Regency of Badung will issue permits without legal basis.”

Meanwhile, the head of the Denpasar Police Precinct, AKBP Bambang Yugo Pamungkas, said the police are still reviewing the report filed by the Regent of Badung. As a result, Pamungkas was not prepared to comment on the case. Adding: “Later, OK? The public complaint is under review for further action by the police.”

Earlier and separately, the Regent of Badung, I Nyoman Giri Prasta, stated that the Traditional Leaders of Ungasan leased out the public lands where the restaurant operated to seven investors for Rp. 28 billion.

The Karma Kandara Resort, located on the cliff above the beachside location, was unaffected by the fire and remains in operation.

Shortly after the blaze, the owners pledged to “redesign and rebuild” the restaurant, which was voted as the “Best Beach Club in Bali” by Hello Bali Magazine, and named among the “World’s 50 Best Beach Bars” by CNN Travel.”