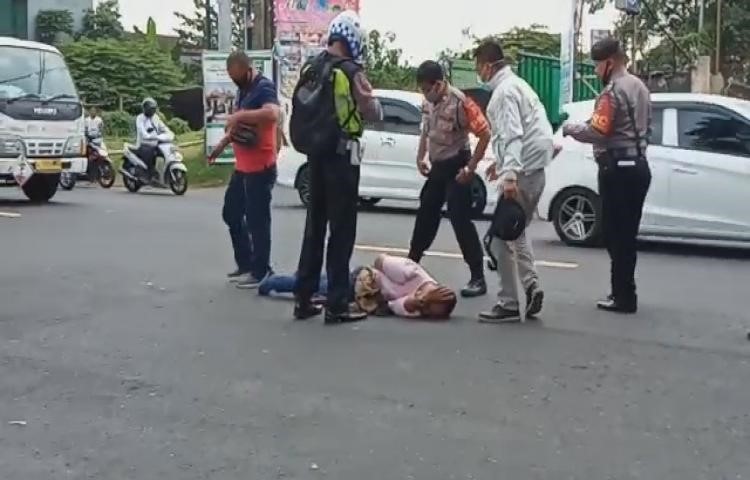 The report of a man attempting suicide in Tabanan, West Bali, provides insights into the profound desperation visited among many people in Bali due to the economic collapse caused by the COVID-19 Pandemic.

As reported by Beritabali.com, Muhamad Wahyudi (31) from Jimbang, East Java, furtively attempted to take his own life in the middle of Bypass Ir. Soekarno in Tabanan on Tuesday, 11 August 2020 at around 3:30 pm.

Police and bystanders said Wahyudi had been terminated from his employment at a foto copy center in Bali’s capital of Denpasar, where he had worked for the past two months.

Eyewitnesses say the despondent and jobless man boarded a bus in Denpasar bound for his home town of Jombang on the Island of Java. Fellow passengers on the bus said “Yudi” screamed in anguish during the entire trip from Denpasar, compelling the bus driver and conductor to disembark the troubled husband and father in mid-journey at Tabanan.

Police at the Patung Adipure Police Station in Tabanan said Wahyudi got down from the bus and stored his belonging at the police post before going to a nearby warung or food stand. Wayan Suparya, who operates the warung, told police that the inconsolable man continued crying throughout his simple meal. A short time later, Yudi went to a local store to purchase a chemical compound for toilet cleaning. He then returned to the police post, where a vigilant officer standing guard prevented him from drinking the toxic cleaning chemical.

According to the Chief of the Tabanan Police Precinct, I Nyoman Suanada, Wahyudi, who was confused and highly distraught, then ran from the police post only to collapse in the middle of the busy roadway, presumably in an attempt to take his own life in the oncoming traffic.

The unfolding tragedy caused a major traffic jam on the Denpasar-Gilmanuk National Highway as people stopped to avoid hitting the man and witness the rescue effort underway.

Police called an ambulance to evacuate the man who steadfastly refused help. A short time later, an acquaintance of Muhamad Wahyuni successfully persuaded his anguished friend to leave the location to seek medical assistance.