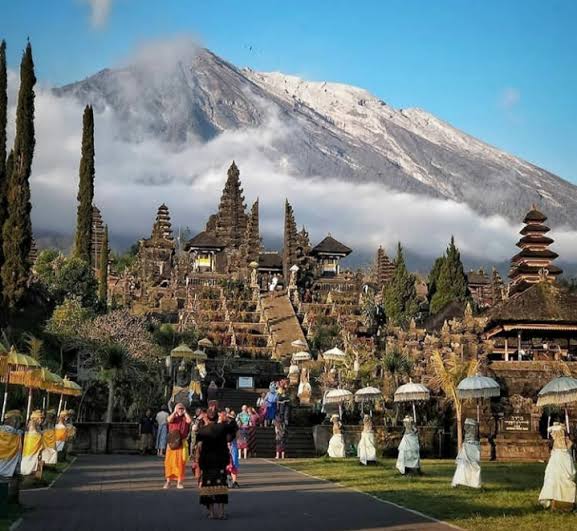 Among the improvements to be installed at Bali’s Mother Temple standing on the slopes of sacred Mount Agung include a parking building and shop kiosks in the Bencingah section of the complex. As reported by Kompas.com, the construction of the new structures will be operational by March 2022 in time for the annual Tawur Labuh Gentuh and Mrebu Gumi ceremonies.

The Director-General of Cipta Karya, Diana Kusumastuti, said the entire development plans at Pura Besakih would take two years to complete starting from 2021.

The parking garage will be four-story-high, covering 55,201 square meters. This space will be able to accommodate 1,369 cars, 61 medium-sized busses, and five large busses. To limit outside lighting pollution, the new parking facility will feature lower-level voids illuminated from within. These voids will also assist in the circulation of fresh air. The new parking facility will also use solar energy panels as part of the drive to achieve sustainable energy.

The inspiration and motivation for the parking structure is a desire to reduce traffic congestion by increasing parking capacity at the complex while at the same time preserving the natural environment and design integrity of Bali’s most religious site.

The total cost of the improvements at Pura Besakih taken from Provincial and National sources total Rp. 514.2 billion.