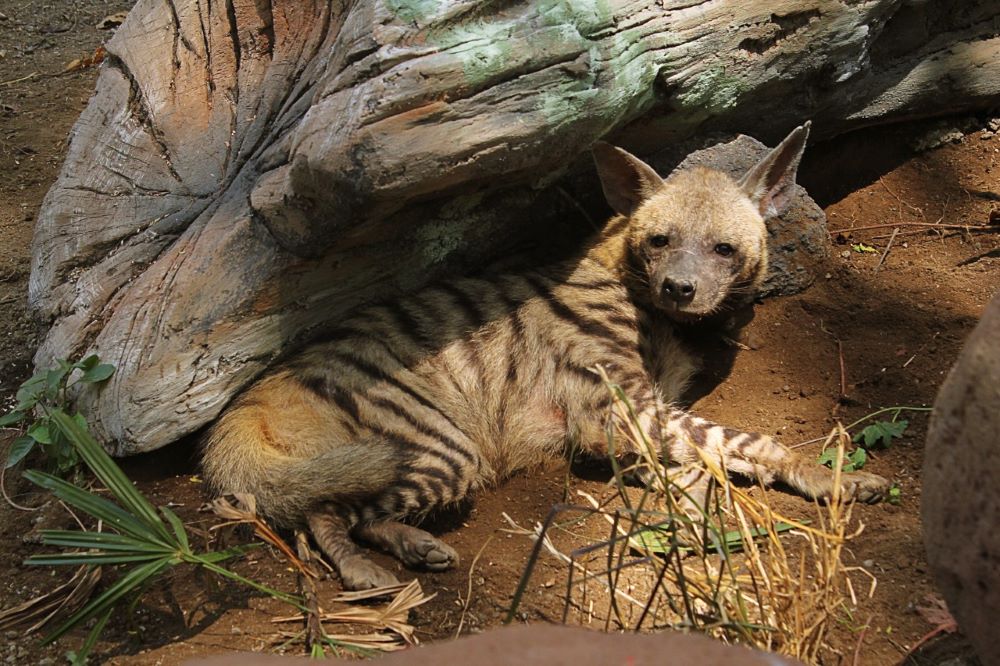 One year ago, the Bali Safari Marine Park welcomed a group of four striped-hyenas (Hyaena hyaena)  to its happy collection of exotic animals hailing from almost every corner of the world. The striped hyenas – one of four remaining hyenas species is mainly nocturnal and notoriously shy.

The hyenas that took up residence at Bali Safari Park – 2 females Manama and Adliya, and 2 males Hamad and Riffa, were compelled to overcome their innate shyness to confront the many thousands of Park visitors eager to see these unique carnivores.

Bali Safari Park, part of Taman Safari Indonesia Group, is now the only conservation organization in Bali to have this unique African animal in its collection. While a notoriously shy animal, that shyness is not all-pervading, as evidenced by the happy news that Manama gave birth to a “baby-boy” hyena on 08 October 2020.

The “baby” weighed only 860 grams at birth but will grow to an average adult weight of around 35 kilograms and live in captivity for more than 20 years.

When celebrity Jessica Iskandar, the mother of Indonesian music star El Barrack, visited the Bali Safari Park on Sunday, 08 November 2020, she was given the honor of “naming rights” for the new-born striped hyena. Jessica gave the matter some thought and then called the baby “Mooi” – a name taken from the Dutch language meaning “beautiful.”

Asked about her dreams for the newly named hyena, Jessica said: “Hopefully Mooi is always healthy, that’s the most important thing, and I hope the doctors and nurses who treat Mooi will also be healthy.”

According to drh. Yohana Kusumaningtyas, Bali Safari’s senior veterinarian, Mooi is receiving intensive treatment from a team of doctors. Only six days after birth, Manama’s milk was insufficient for Mooi’s needs. As a result, the doctors formulated a special milk formula that Baby Mooi was fed at six-hour intervals.

The team of expert doctors continuously monitored Mooi’s development and weight, adjusting his formula along the way. Two weeks after birth, Baby Mooi’s eyes opened. A week after that, teeth began to emerge, and the toddler took its first halting steps that allowed him to take his first exploratory steps into the wider world. One month after his birth, doctors slowly introduced solid foods into the infant’s diet of milk formula.

According to the Assistant Curator for Bali Safari Park, Nyoman Su Journalist, Mooi’s birth resulted from the hard work of all parties at the Park, including the Keepers (animal caretakers) who consistently apply the principles of good animal management. In the future, Nyoman Su Journalist predicts even more animal births in the Bali Safari Park, both in species endemic to Indonesia and in animals from abroad.

Thomas Colbert, General Manager of Bali Safari Park, also expressed his happiness at the latest addition to the Parks collection of animals. Adding: “Our joy that cannot be described in words. This is because we, as a conservation organization, have succeeded in breeding this unique animal for the first time in Bali or maybe even in Indonesia. What’s more, (this was done) during the current Covid-19 pandemic conditions.”

For those coming to visit Mooi and his extended family of more than 400 animals from across 100 species, Colberts said, “We encourage visitors to follow health and safety protocol during their visit to Bali Safari.”

Continuing conservation efforts at the Bali Safari Park is supported, in part, by the #Kitacintasatwa campaign that has attracted donations from people who want to assist the Parks’ animal conservation activities. Launched at the beginning of the Covid-19 Pandemic, it continues to help the Park provide the highest level of care to its animal collection.