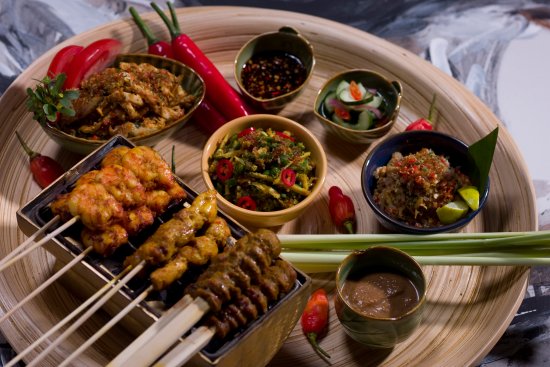 Bumbu Bali – the award-winning home of genuine Balinese cuisine was founded in 1996 when the Swiss-born founder-owner, Heinz von Holzen, took his admiration of Balinese cuisine, which had already resulted in a popular Balinese cookbook, and decided to open a restaurant dedicated to the Island’s cuisine.

Heinz working together with his Balinese wife, Puji, Bumbu Bali Restaurant opened its doors on Jalan Pratama on the Tanjung Benoa Peninsula, next door to Nusa Dua.

Bumbu Bali’s open design affording visitors a chance to look at a working Balinese kitchen or “Paon”; the use only the finest, freshest ingredients; and an unwavering commitment to authenticity in its presentation of Balinese food quickly brought sustained success. Such was the craze for Balinese food generated by Bumbu Bali that within six months of its opening, an affiliated Cooking School also secured great success via a formula of traditional market visits and sharing the foundation spices or “base” (pronounce “ba-say”) – use in all Balinese cooking.

A short while later, a second Bumbu Bali was opened several hundred meters down to road to handle the overflow demand from diners for lunch and dinner, and for a place in one of the daily cooking classes.

Over the intervening years, Heinz produced a small library of beautiful cookbooks with titles such as “The Food of Bali,” “Bali Unveiled: The Secrets of Balinese Cuisine,” “Feast of Flavors from the Balinese Kitchen,” and “Street Food of Bali.” Each book is carefully presented in a way to be understandable and practical for the creation of memorable Balinese cuisine in home kitchens far removed from the Island of Bali. As pleasing on the palate as they are on the eye, Heinz von Holzen wrote the recipes and professionally photographed each mouth-watering dish included in his best-selling series.

In 2019, with the lease ending on the original Bumbu Bali Restaurant on Jalan Pratama, a decision was made to open the new concept Art Cafe Bumbu Bali on Jalan Siligita No.101, across from the Surya Husada Hospital located on the north border of the Nusa Dua Complex. Offering open-air or air-conditioned seating, the Art Café Bumbu Bali has a distinctive Balinese vibe. It provides views of Nusa Dua and South Bali from its naturally elevated hillside location.

During the island-wide business-slowdown caused by the COVID-19 Pandemic, Heinz and Puji von Holzen used the business slump as the perfect opportunity to remodel and refurbish the remaining Bumbu Bali location on Jalan Pratama. Master Architect Walter Wagner from Habitat was employed to redesign Bumbu Bali. The brief provided by Heinz and Puji required that a traditional and timeless Balinese ambient be at the core of any redesign. Old style roofs, red brick walls, hand-carved Balinese wood finishes, and an art collection reflecting every corner of the Island also became part of the “new” Bumbu Bali.

The planning and design of the refurbishment took place between October and December 2019. According to schedule, the Restaurant closed for renovations on 13 January 2019 as a team of talented artisans descended on the site to transform the space. The renovation became more a rebuilding with two new pavilions added to the building, luxurious bathrooms installed, and two modern kitchens built to the highest specifications inaugurated. The six-month reconstruction ended on 05 June 2021.

Unlike the building of the first Bumbu Bali in 1996, Heinz and Puji had a talented assistant to lend a hand in bringing the new Bumbu Bali to fruition. Puji’s and Heinz’s son, Putu Fabian von Holzen, personally supervised the entire new building project.

With the physical construction at an end and in keeping with local traditions to seek God’s and the Cosmos’ blessing on every human endeavor, an elaborate series of ceremonies were prepared to seek the spirits’ blessings and permission of those who “possess” the land where the building stands.  Ratu and his Ibu Jero from the Grya Natuna in Denpasar prepared a beautiful blessing ceremony and offerings, the essence of which is surrendered to the gods.

With the blessing of the Gods in hand and, following protocols provided by the Government of Bali, the “new” Bumbu Bali reopens for business on Thursday, 02 July 2020, with an initial offering of a limited a la carte menu featuring many of Bumbu Bali’s Signature Dishes and, of course, the daily Balinese Cooking Class.

Email for Bumbu Bali and Art