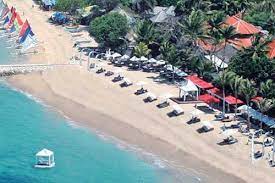 The Puri Santrian Sanur Resort owner, IB Gede Sidartha Putra, told NusaBali and other media that promotional material issued by his hotel listing a “private beach” on the beachside of his popular resort was only a “marketing trick.”  In fact, all beachfront in Bali is public property. The hotel’s claim in promotional material was intended, according to the hotel, only to suggest that access to the beach via the hotel property was private.

NusaBali and the national press reported a 29-year-old Bali resident, Mirah Sugandhi, posted a video to her Instagram Account (@mirahsugandhi) complaining how a Puri Santrian Security Guard told her and her infant daughter that they were not permitted to sit on the hotel’s beachfront.

Contacted by NusaBali on Wednesday, 24 March, Sugandhi related how on Tuesday at 4:00 pm, a uniformed security guard curtly questioned where she and her daughter were from and if they were guests of The Puri Santrian.

Mirah Sugandi, the wife of Balinese singer Bayu Cuaca, was told to move to an adjoining beach if she was not a hotel guest. Mirah claims her daughter became frightened at this point, calling for her father, who was fishing further down the beach.

Mirah said she was reluctant to immediately report the incident to her husband, fearing he would become angered at her treatment by the hotel. “I was afraid that if I told my husband, it would cause a fuss. I don’t want to interfere with the activities of the hotel’s guests. At the time, I simply move to sit on a rock further down the beach. I saw other people sitting and swimming on the beach where earlier I was told to leave. They were not evicted. Maybe they were hotel guests,” explained Mirah.

After being ousted from the beach in front of the Puri Santrian Hotel, Mirah Sugandhi said she posted about the incident to the Instagram Account of the Hotel Puri Santrian. Adding: “In fact, I don’t have a problem with the owner of the hotel. But I asked why their security (satpam) acted in the way he did. It would be better if the Satpam politely told people they are forbidden to sit on the public beach. But, because of the way the security guard spoke, I automatically thought it meant the hotel owns the beachfront.”

Mirah, a life-long resident of Sanur, says that she has played on the beach in front of the Santrian Beach Hotel since she was a child. Continuing, she said: “I am from Sanur. Since the time I was small, I played on this beach, nobody (ever) told me that was not allowed. Suddenly, there is an incident like this. I reflected on my youth, thinking in Balinese’ Ipidan adi sing ada kene-kene nah, jani adi serem dini’ (In the past, it was never like this. Now it become quite frightening.)”

Separately, the Head of the Denpasar Municipal Tourism Office, MA Dezire Mulyani, confirmed he was looking into the incident and claims of a “private beach” in front of the Hotel Puri Santrian. He promised to visit the beach with members of the Sanur Community (Keluruhan) and the Indonesian Hotel and Restaurant Association to obtain more details.

The owner of the hotel, IB Gede Sidartha Putra, is also the chairman of the Sanur Development Association (Yayasan Pembangunan Sanur).

Zonage and usage laws in Bali affirm that private beaches are not allowed. All beach areas must remain open for the enjoyment, religious rituals, and use by the general public. Moreover, zoning laws forbid landowners facing beachfront from erecting any permanent structure within 100 meters of the high-water mark.

Dezire was quoted by NusaBali saying owners of hotels cannot forbid members of the public from using a beachfront. “On that beach, anyone can go there. It does not belong to the hotel or any single individual,” the Denpasar tourism chief said.

In response, the Hotel Puri Santrian owner, IB Gede Sidartha Putra, who also heads the Sanur Development Association (YPS), is characterizing the incident as a case of miscommunication. He said on Sanur Beach, no such thing as a private beach exists. “All beaches are public, permitting the public to relax, fish, and hold traditional rituals. There are no rules from hotels forbidding the use of the beaches,” said Sidartha on Wednesday, 24 March 2021.

Siddartha said the Hotel Puri Santrian has been in operation for 50 years. Adding: “This is the first case of its kind and has become a lesson for all parties including the hotel and how it trains it staff. However well-intentioned, the communication style must be appropriate and polite, avoiding such miscommunication.

Questions persist, however, as to how a uninformed Satpam, who is usually trained and licensed by the Bali Police in matters of basic law and public order, attempted to evict someone from using a public right-of-way – something which is an inalienable right. Whether the security guard, Alit, will face dismissal, be decertified by the police, or be sent for additional training is not clear.