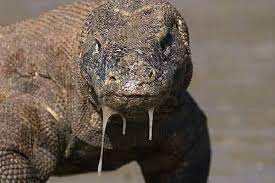 Politeia.id has published a news report, perhaps suggesting subtle resistance by giant reptiles to the ongoing creation of the “Jurassic Park Project” on Rinca Island located within the Komodo National Park.

In an image published on social media, a giant Komodo Dragon (Varanus komodoensis) is seen blocking a truck involved in developing the Jurassic Park Project. The picture was published on the Twitter account of “Save Komodo Now” @KawanBaikKomodo on Friday, 24 October 2020, and received over a thousand retweets and more than 800 likes.

The largest surviving species of prehistoric lizards, the Komodo monitor lizard is endemic to the Island of Komodo, Rinca Island, Flores Island, and Gili Montang in the Indonesian province of East Nusa Tenggara, where it grows to a maximum length of 3-meters and weigh as much as 70 kilograms.

The posting, quoted by Politeia.id, is from a group who are outspokenly opposed plans to develop the Komodo National Park, who uploaded the picture of the truck in a stand-off with a dragon and an accompanying message on social media saying: “Sad! Komodo is facing a Jurassic Tourism building project truck on Rinca Island. The first time the Komodo Dragons have heard an engine’s sound and smell of exhaust smoke. What will the impact of these projects look like in the future? Does anyone care about conservation?”

The Jurassic Park Project on Rinca Island will create viewing areas covering 1.3 hectares on Rinca Island, one of the three largest islands within the Komodo National Park.

The enhancement of The Komodo National Park and the adjoining Regency of West Manggarai on Flores Island with infrastructure improvements are part of a program launched by the Government in 2019. The program is championed by President Joko Widodo and the Coordinating Minister for Maritime Affairs and Investment to boost national tourism.

Minister Luhut has described the building project on Rinca Island as hosting a research center that aspires to improve the local populace’s welfare.

An animated film uploaded to Instagram by Fania Hafila, the architect in charge of the “Wisata Jurassic Indonesia Project,” shows the basic design for the Rinca viewing platform facility complemented by the musical score by John Williams for the Hollywood blockbuster “Jurassic Park.” The closing moment of the video shows the logo of Indonesia’s Ministry of Public Works and Public Housing who are undertaking the construction.

However, the Komodo Dragon Viewing Area’s opening on Rinca Island may present a more practical and problematic obstacle, perhaps not contemplated by planners. Well-informed conservationists generally agree that the baiting or feeding of the Komodo Dragons to bring them into view of visiting tourists is damaging to the reptiles’ natural predatory instincts. Because of this, conservationists in charge at Komodo long ago outlawed baited feeding of the dragons in favor of walking tours of the natural habitat in the hope of coincidental spotting the reptiles.

Because of this, questions are being raised by critics of the Jurassic Park Project on Rinca Island, asking how free-roaming dragons will be lured to the viewing area without resorting to the condemned practice of baiting the dragons.

The Tourism Rescue Community Forum (Formapp) is opposed to the Rinca project, claiming the concrete constructed information center and viewing deck is at odds with the Komodo Dragon’s natural habitat and The Komodo National Park’s designation as a national conservation area.

Shana Fatina, a Director of the Labuan Bajo Authority, has defended the Pulau Rinca Jurassic Park Project’s construction, claiming that the structures and the access roads used in its construction are located on lands zoned for public use. Shana also insists that the facility’s planning included a detailed environmental impact assessment and input from the Ministry of the Environment and Forestry together with UNESCO.

But still unclear is how the dragons will be coaxed to visit the 4,000-square-meters tourist information center and viewing deck without reverting to controversial feeding and baiting practices.

Shana, who once headed a government-endorsed halal tourism project in Labuan Bajo, explains that the Rinca Island Project is intended to enhance its tourist carrying capacity. The Government’s vision is to utilize Rinca Island as the closest point to the population center of Labuan Bajo for the general public to view the Komodo Dragons.

﻿The other and more remote main islands of the Park – Komodo Island and Pandar Island will be reserved exclusively for tourists paying a special membership fee.