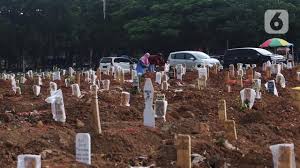 The cumulative total of deaths attributed to COVID-19 has surpassed the 100,000 marks since the disease was first acknowledged in a speech by President Joko Widodo on 02 March 2020.

Through Wednesday, 04 August 2021, the Indonesian Government counted 100,636 coronavirus deaths. That tragic total came after a body count by the Task Force for the Mitigation of COVID-19 of 1,747 people dying in the preceding 24-hours.

As reported by Kompas.com, Indonesia has 524,011 people currently under care for COVID-19.

The Island of Java experienced the highest number of deaths during July 2021.

The Government of Indonesia aims to vaccinate 208,265,720 people as quickly as possible to achieve the 70% vaccination rate that experts project will achieve “herd immunity.” 10.55% of the national populace, or 21,965,366 people, have been “fully vaccinated” by receiving two injections.

The Government continues to prioritize vaccination of medical personnel, public officials, the elderly, those considered medically at risk, children between the ages of 12 and 17. The general public is also being vaccinated on a large scale.

Reflecting the urgency with which the Government is carrying out the vaccination program, the COVID-Czar Luhut Binsar Pandjaitan said on Monday, 02 August 2021, that Indonesia wants to vaccinate between 60 to 70 million people in August and an equal number again in September.