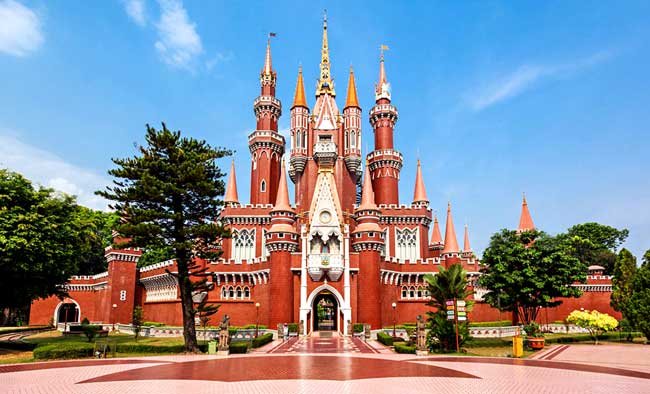 Kompas.com covers the seizure of management control by the Indonesian Government of the Taman Mini Indonesia Indah (TMII) complex in Jakarta from the Harapan Kita Foundation. The Head of the Presidential Staff, Moeldoko, defended the move in a press conference at the Executive Office Building (Gedung Bina Graha) on Friday, 09 April 2021.

Moeldoko said the Government took control of the National Landmark to stem the Park’s growing loss of between Rp. 40 and Rp. 50 billion last year and its continuing inability to make a financial contribution to State coffers.

The 150-hectare TMII opened in 1975 after a 3-year development period. Intended to become a permanent exhibit representing Indonesia’s then 26 provinces, TMII or “Indonesia in Miniature” was the brainchild of Madame Tien Soeharto (Siti Hartinah), the wife of Indonesia’s long-reigning second president, Soeharto. At the time of its inauguration, TMII was widely criticized in some circles as a financially wasteful project when seen within the financial restraints of a developing country.

At the press conference, Moeldoko said the country owes a debt to the late President Soeharto and Madam Soeharto for the idea to build and develop Taman Mini Indonesia Indah. He said he regretted that each year TMII needs Rp. 40-50 billion to cover its losses.

The Head of Staff for the Indonesian President denied that the decision to assume control and ownership of TMII was in any way connected with continuing litigation against the park by a Singapore Company – Mitora Pte. Ltd. Underlining this point, Moeldoko pointed to Presidential Decision Number 19 of 2021 on the management of Taman Mini which made no mention of the legal case against TMII.

The stakeholder’s decision followed an investigation commenced in 2016 by State Secretary Pratikno (Mensegneg) regarding the Park’s overall management. At the same time, an audit was performed by the Law Faculty of Gadjah Mada University (UGM) in Yogyakarta and the National Government Internal Auditor (BPKP) – reviewing the TMII as a national asset.

The review carried out by UGM and BPKP resulted in three recommendations. First, TMII needs to be managed by a private company. Two, TMII must be managed in cooperation with the Indonesian Government. And, third, TMII should become a Public Service Agency (Badan Layanan Umun).

Based on the review and BPKP’s recommendation, the President issued Decree Number 19 of 2021 that supersedes Presidential Decree Number 51 of 1977 on the Management of TMII.

Reviewing the past operation of TMII, Moeldoko said the Park had fulfilled its mission of educating the public. Adding: “This has been the place where religious, tribal, and cultural toleration have been taught to the general public. . .This is the place that continues to be enjoyed by our children. But, at the same time, its management must be improved.”

Established and managed by the often-controversial Harapan Kita Foundation controlled by the Soeharto family, Moeldoko assured the Park’s management would not be moved to a Foundation controlled or owned by President Joko Widodo. He called on members of the public not to manufacture a negative narrative surrounding the management change at TMII, which remains a public asset owned by the Republic of Indonesia. Adding: “I want to remind all, don’t allow a view to emerge that President Joko Widodo now manages a new foundation. That is a primitive view of the matter. Let’s not entertain a view of this nature; it’s just not true. President Jokowi has no thoughts of this kind.”

“One future option will be to give the management of TMII to a single State-owned Company (BUMN) already operating in the tourism sector,” said Moeldoko.

Moeldoko wants TMII to be under more professional management in the future. Saying the development of Indonesian tourism is progressing well. For this reason, Moeldoko said TMMI to be henceforth a place that has an economic value, a social-cultural value, and a variety of other benefits to the Nation.

Moeldoko wants the massive TMII to become an area for the conservation, education, and development of the people’s culture.