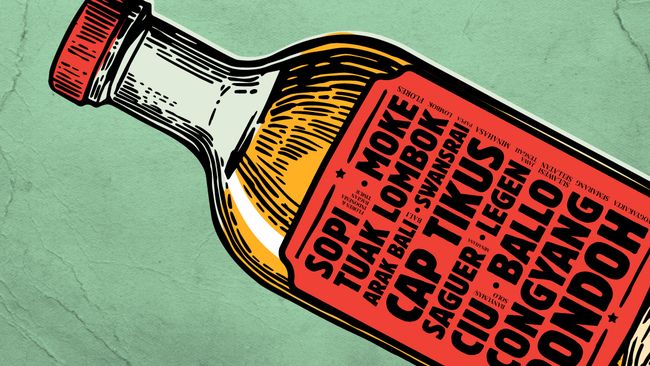 The recent decision by President Joko Widodo, under pressure from Islamic groups, to reverse his decision to include alcohol production in the national positive investment list brings to the fore questions about alcohol drink in Indonesian society.

HISTORIA – an online Indonesian language publication has explored the role of alcohol in the Indonesian archipelago’s history in an article titled “Alkohol dan Kenjeniusan Masyarakat Nusantara” (Alcohol and the Local Genius of the People of the Nusantara) published on 05 March 2021.

The President’s 03 March 2021 decision to retract a planned deregulation of the alcohol sector has renewed discussions on the role alcoholic beverage plays in people’s daily lives in many Indonesia regions. In North Sumatra, people drink Tuak, and in Java, the preferred libation is Ciu or Congyang. In Eastern Indonesia, people enjoy a potent brew call Sopi, or Moke in Eastern Nusa Tenggara. In North Sulawesi, people prefer to tipple on Cap Tikus.

The enjoyment of alcohol in Indonesia traces its roots back to at least the times of the archipelago’s ancient Hindu-Buddhist Kingdoms. Stone inscriptions dating from the 10th-century already record the widespread use of intoxicating drinks.

The creativity referred to by Tommy Awuy is, in his view, how the people of the archipelago responded to the abundant nature that surrounds them. In a normal reaction to that which surrounded them, Indonesia’s ancient people made alcoholic beverages from the trees, fruits, and leaves.

In the online dialogue, Tommy Auy explained: “Arak, for example, emerges from lontar palm, which emerges from palm sugar and other substances. This is merely a positive human response to nature.”

According to Tommy, alcohol ushered in the way to create natural wealth via the production of alcoholic beverages while, at the same time, showing respect for the generous bounty that nature bestows. In turn, the natural connection between humanity, nature, and alcohol paves the way for aspects of spirituality and euphoria.

Elaborating further, Tommy said: “That was the response of our (Indonesian) ancestors who, with their natural genius, produced the commodity we now know as alcohol. But now, alcohol is incorrectly seen as synonymous with drunkenness. But, that is an incorrect perception. So it now remains for us to correct the record and make sure alcohol’s reputation does not suffer from character assassination.”

Meanwhile, Saras Dewi, a professor of philosophy at the Faculty of Culture at the University of Indonesia, a native Balinese, and a female activist – says that alcohol in the archipelago enjoys both a social and spiritual aspect. Citing her birthplace as an example, Saras said Balinese Arak could not be separated from the island’s local culture. In Bali, she added, Arak is used to promote and protect community relationships in how it is used in various activities. “In the ancient right of ‘megibung’ – communal dining tradition used by warriors is always accompanied by the consumption of Arak or Tuak,” she said.

From a spiritual perspective, Saras said that alcohol demonstrates the extraordinary imagination of Indonesia’s ancestors. She alludes to alcohol’s mention within the holy Book of Regweda – an ancient collection of Indian Vedic Sanskrit hymns. Those hymns mention how the ancient gods consumed distilled and extracted drinks to give birth to a sense of immortality.

In Hindu-Balinese beliefs, alcohol is used in both the human realm and in other domains. Saras, a Balinese, tells how her family would prepare a small glass of wine as a regular offering to her late grandfather. In Bali, Arak is used in prayer to invite communication with “the Almighty.”

Brem wine can be offered or, alternatively, poured onto the ground, said Saras.

Continuing, Saras explained how in Karangasem, Arak made from rice forms a part of sacred ritual. Rice and rice wine are linked to the goddess Dewi Sri. Rice made into wine is used to draw humanity close to the ethereal.

“One part of this ritual is how the fermentation of rice is to be enjoyed communally, and in so doing unifies ordinary human beings into a single, sacred, transcendental body,” Saras explained.

In ancient Indonesia, the presence of alcohol demonstrates the imagination of the Country’s ancestors. In a society imbued with animism and dynamism, alcohol represents an invention of great genius, not merely a drink to precipitate drunkenness and unconsciousness.

Saras explained says alcohol represents technology and the ingenuity of Indonesia’s ancestors. Alcohol is a transcendent experience. It allows the user to feel something outside oneself, the presence of another, even a greater being.

To the Balinese, drinking is done in stages. In Bali, drinking wine goes through several stages. Starting from mild intoxication, moderate bliss, until drunkenness, to finally unconsciousness – a state known as punyah in Balinese.

Tommy F. Awuy rejoined, reminding that “local alcohol” is a legacy that must be preserved, a product born of nature that gives life. From local alcohol, the natural energy needed to foment creativity also emerges. He said he hopes that alcohol is not only described as a commodity that causes destruction or is somehow always linked with criminal behavior. In his view, alcohol possesses its own native sense of genius.

Defending the continuing role of alcohol in the life of the archipelago and the Island of Bali, Tommy proclaimed there exists an: “Ancestral respect for nature. We should also respect the ancestors who have produced alcohol, representing the fruit of creativity and their respect for grains and fruits until Dewi Sri appeared. All of this cannot be separated from nature which has its owns energy – known as ‘Taksu’ in the Balinese language.”

“I think now is an important time to write and also protect, care for, and preserve all the knowledge of our ancestors regarding Arak, Tuak, Brem, Sopi, and Moke from eastern Indonesia. They all trace back to our ancestors. Our heritage is so valuable. It must be safeguarded,” added Saras.

Alcohol and its enjoyment in Indonesia traces its root back to the most ancient times of the archipelago. And that’s something we all can drink to!