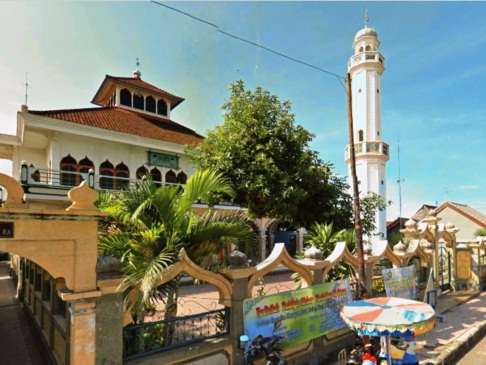 While Bali has a population that is overwhelmingly Hindu in composition, the history of Islam on the island dates back to at least the 14th century when the Nurul Huda Mosque was built in Gelgel, Kungkung in southeast Bali.

The Nurul Huda Mosque that still stands in “Kampung Muslim” in Klungkung is the oldest mosque existing on the Island of Bali.

Located about one hour by car from Bali’s capital of Denpasar, Masjid Nurul Huda stands at the heart of Kampung Islam Gelgel – a community now estimated to have 1,000 residents. When entering the Mosque grounds, an ancient minaret measuring 17 meters stands immediately to the east.

When the Masjid Nurul Huda was erected in the 14th century, Bali lived under the Kingdom of Gelgel led by the Majapahit Raja Dalem Ketut Ngulesir (1293-1527 AD). During this period, the Raja of Gelgel had made a pilgrimage to the seat of the Majapahit Kingdom in East Java, returning to Bali with 40 Muslim soldiers who safeguarded his journey.

Enamored with the Island of Bali, the returning Muslim soldiers successfully sought permission from the Raja to stay in Bali and eventually built a mosque in Gelgel.

Thriving in Bali, these earlier Islamic settlers established an Islamic enclave in Gelgel that stands to this day as a tightly-knit religious community on an otherwise predominantly Bali-Hindu Island.