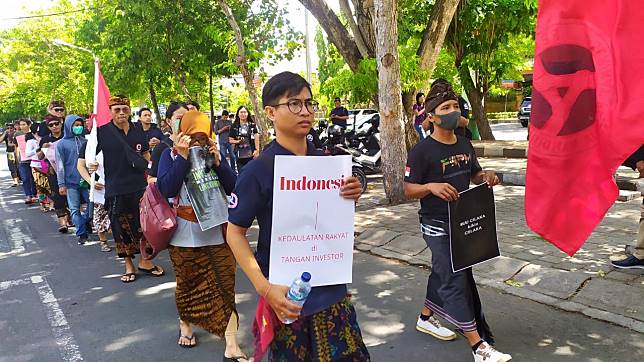 As reported by Kompas.com and Radar Bali, large groups assembled from morning until mid-day in downtown Denpasar on Jalan Sudirman in front of the Udayana University Campus. The protestors, comprised of workers and students, then marched towards the Provincial House of Representatives (DPRD-Bali), arriving at 3:00 pm.

With police claiming outside agitators had infiltrated the protestors, the protestors, dressed mainly in black, began throwing stones, bottles, and other items at the police guarding the DPRD-Bali. Police responded by shooting tear gas canisters into the crowd.

The irritating tear gas affected the many students’ eyes taking part in the protests together with members of the press covering the event.

Police attempted to limit the demonstrators to one side of the divided boulevards in downtown Denpasar to allow traffic to continue to flow to adjoining areas where several major hospitals are located. Rafael, a traffic officer on duty in the area, said: “If you close this road, who will be responsible if a sick person needs to go to the Sanglah General Hospital?”

Meanwhile, the demonstrators feel they were acting within their rights to protest on the streets after sending a formal letter to the police advising the authorities of their intent to demonstrate, allowing the police ample time to make suitable arrangements of traffic in the area.

Kompas.com reported that the crowd remained in place until 4:15 pm when the stone-throwing began to subside slowly. A separate group remained outside the campus of Udayana University, delivering a series of speeches demanding the recently passed Job Creation Law be revoked.

A spokesman for the “Bali Will Not Remain Silent Alliance (Aliansi Bali Tidak Diam),” Abror Torik Tanjilla, speaking at the Udayana University Campus on Thursday, said: “The demands of my friends protesting today is for the Governmenareand the DPR-RI (The Indonesian House of Representatives – DPR-RI) to revoke the Job Creation Law which they view as very detrimental to the Indonesian people.”

Tanjila insisted that the mass protests would continue until the government met the protestors’ demands.

Police and military personnel remained on the grounds of the DPRD-Bali until late Thursday afternoon.

Similar protests involving thousands were also taking place in major cities across Indonesia, including Jakarta, West Java, and East Java. The demonstrations were precipitated by the passage of the controversial Job Creation Law in Jakarta on Monday, 05 October 2020.

Posters and banners unfurled outside the DPRD-Bali carried messages calling for the House of Representatives’ disbanding, supporting a no-confidence motion against the current government, and calling for the rejection of the Omnibus Law.

Protestors also installed banners at the headquarters of the major political parties in Bali, who had voted to pass the Job Creation Law in the National House of Representatives in Jakarta.