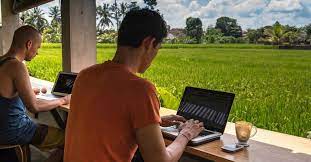 The Minister of Tourism and the Creative Economy, Sandiaga Uno, has commissioned a study estimating that 25% of Indonesian Civil Servants could move their work location to the Island of Bali.

As reported by Balipost.com, speaking at a press conference on Saturday, 22 May 2021, Vinsensius Jemadu, the Director of Marketing for the Ministry of Tourism, confirmed that 25% of government workers could practically relocate and “Work from Bali” (WFB).

Jemadu said the most readily available way to boost Bali tourism is to relocate civil servants from their present locations to the Island of Bali. At the same time, the Tourism official admitted the cost of undertaking such a relocation would likely be substantial.

Vinsensius Jemadu said that any WFB program would necessarily be conducted under the Coordinating Ministry for the Economy and Investment. They would establish policies on how “Work from Bali” would be implemented and to what extent it might be applied.

In the study performed by the Ministry of Tourism, it was calculated that 50% of civil servants could relocate their work location. The segment of the government workforce could, the study contends, can be divided into two parts, with 25% working from Bali and the remaining 25% to other locations in Indonesia in need of an economic boost.

Revealing their thinking behind the plan, Tourism official explained that hybrid meetings involving live and virtual elements could be headquartered in Bali. Officials also recommend that government workers be persuaded not to bring their families to Bali to reduce the risk of contagion and maintain strict health protocols.

Commenting on the plan, the chairman of the Bali Tourism Board (GIPI-Bali), Ida Bagus Agung, said the proposed WFB program would create economic opportunities for more than 500 medium and small-sized enterprises.

The Operational Director of the Indonesian Tourism Development Corporation (ITDC), Arie Prasetyo, supports the plan, saying Bali remains an icon of Indonesian tourism. Adding: “We manage the Nusa Dua Complex. For the past 1.5 years, the people living around Nusa Dua have suffered a decline in income from the tourism sector.” Prasetyo said ITDC would support the proposed WFB program by rigorously applying health protocols.