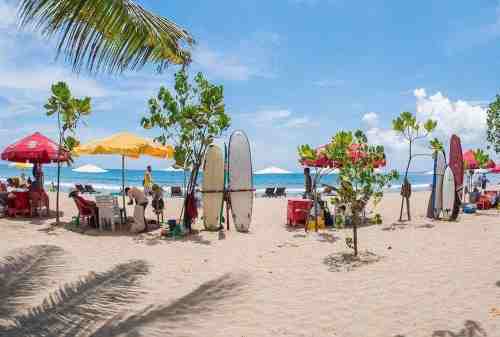 The traditional chief of Kuta Village in Bali, I Wayan Wasista, has warned masseurs and traders working on Kuta Beach to be friendly and stop bullying tourist visitors enjoying the Beach.

As reported by NusaBali.com, Wasista says irresponsible traders and masseurs on Bali’s iconic Beach are damaging the image of Bali tourism. The Village Chief said that as Christmas and New Year approaches, the number of tourist visitors to Kuta’s Beach is sure to increase.

And, while Wasista hoped the growing tourist numbers would improve the income of beach workers, he added: “I hope that the traders and masseurs on Kuta Beach become more friendly and not try to force visiting tourists in selling their goods and services.”

Wasista said that several recent incidents on Kuta Beach, documented on social media, should serve as an object lesson to prevent the image of the beach area from being damaged by irresponsible individuals. Adding: “Because of this, we urge all traders and masseurs on Kuta to not allow a repetition of incidents such as those seen on social media. Don’t let there be coercion and the arbitrary setting of prices at unfair levels.”

In his capacity as traditional village chief, Wasista is threatening to revoke the membership cards of traders and masseurs issued by the village and needed to operate on Kuta Beach.

“If tourists experience future harassment, they are welcome to report the Kuta Beach Task Force. If we can verify their reports, then the trader or masseur will be suspended, and they will not be allowed to work on the Beach in the future,” said Wasista.

Meanwhile, the chairman of the Kuta Beach Task Force (Satgas Pantai Kuta), Wayan Sirna, has confirmed that additional remedial steps have been taken to improve the manner and professionalism of traders on the Beach. All beachside traders have been called together and given a briefing on friendliness and good service so visitors’ enjoyment of Kuta Beach will not be disturbed.

Traders were also cautioned to stick to their declared fields of trade and not offer services outside their designated specialty.

“Recently, there have been problems caused by the lack of visitors. For example, traders who should only be selling cloth now offer massage services. It’s things like that that we insist be returned to their original state. In addition, we have asked that traders remain in their respective designated zones,” said Sirna.