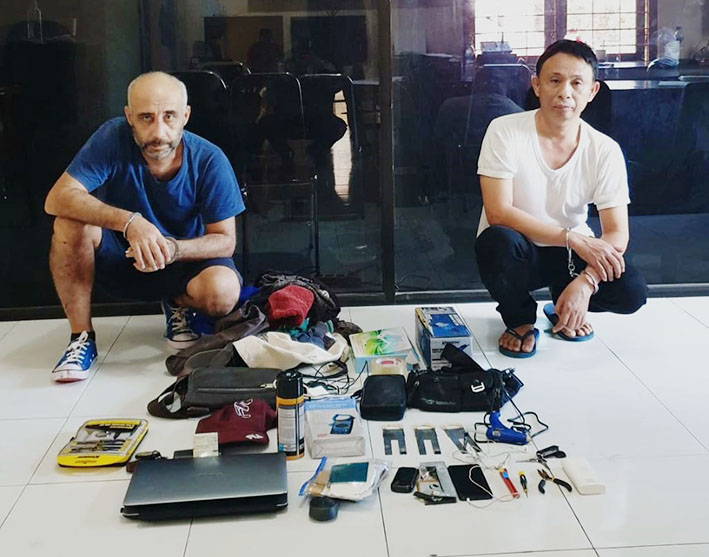 Nusa Bali reports that a Turkish National, Dogan Kimis, released from prison in Bali in April after his serving a two year sentence for skimming ATM terminals, has been re-arrested by Bali police on Friday, 03 July 2020, for returning to his illegal trade of stealing bank data.

Kimis was initially arrested on 09 March 2018 with two Turkish accomplices, Mehmet Ali Mentes (31) and Tayfun Koc (36), for skimming Bank Mandiri ATMs in Seminyak and Canggu, The three Turks were subsequently sentenced to two years in prison.

Just two months after his release from prison, Dogan Kimis (45) was arrested for skimming another Bank Mandiri ATM located at the Pepito Supermarket on Jalan Raya Tibubeneng in Canggu at 11:00 pm on Friday, 03 July 2020. In his latest arrest, Kimis was taken into custody with an Indonesian from West Java, Noldy Wullur (49).

Police became aware of the latest skimming incident based on a Bank Employee report who told police that on the morning of 03 July 2020, he had found a hidden camera installed at the Bank Mandiri ATM in Canggu. Following the discovery, police placed the ATM under a police stakeout until Dogan Kimis and Noldy Wulur returned at 11:00 pm to retrieve their skimming device.

Police arrested both men at the scene.

Police were surprised to learn that Dogan Kimis had just been released from prison in April for committing a similar crime. The two men are linked to four separate incidents of skimming data. Searches of Kimis’ private residence allowed police to seize an Asus Laptop Computer, one hidden camera, three scanning plates, five handphones, a pair of pliers, one cutter, and a passport in the name of Dogan Kimis.

Dogan Kimis was staying at the Villa Anggrek Residence in Jimbaram. Noldi Wullur’s stated address is in Bandung, West Java.

Police are considering charging the men under the Information and Electronic Transaction Law (ITE) with crimes carrying maximum prison terms of 7 years.