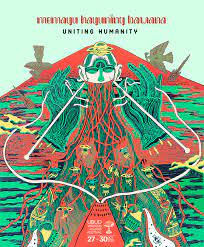 Ubud Writers and Readers Festival (UWRF), Asia’s leading festival of words and ideas, has announced its main program for 2022, inviting audiences to discover unique voices and exceptional literature from familiar and new sources. UWRF will take place alongside an immersive temple celebration.

The UWRF 2022 lineup offers festival-goers an exciting range of over 50 insightful conversations that explore the power of storytelling and the written word’s role in upholding humanity’s values and freedoms.

More than 150 writers and thinkers will converge on Ubud, Central Bali, in October 2022 to participate in thought-provoking discussions on the issues that bind us together and what pulls us apart.

Unveiling the 19th festival’s main program, festival founder and director Janet DeNeefe, said: “It is such a joy to return to the festival’s in-person format this October, bringing Indonesian and International writers together in talks and conversations after the pandemic has kept us separated for so long.

” From 27 to 30 October 2022, literary luminaries and acclaimed social commentators will reflect on this year’s Festival theme ‘Memayu Hayuning Bawana,’ – an ancient Javanese philosophy translates to mean ‘Uniting Humanity’ – humanity’s capacity to beautify our world and strengthen our ties as a collective. DeNeef said. Continuing, she commented: “In a year that has been so difficult for many, with war and conflict, natural disasters and political turmoil affecting our lives and the lives of our neighbors, friends, and loved ones, we ask, how can we unite the many strands of different cultures and perspectives to create a deeper understanding, mutual respect, and equality?”

On day one of the UWRF, the festival reflects on the extraordinary life and immense contribution that Putu Oka Sukantahas has made to Indonesian literature over more than 40 years. Imprisoned for ten years during the Soeharto era, Putu learned the art of acupuncture and herbal medicine behind jail walls while writing his works. He is the 2022 recipient of the UWRF Lifetime Achievement Award.

Other UWRF highlights include:

To learn more about the Ubud Writers and Readers Festival, visit the Festival’s Website.