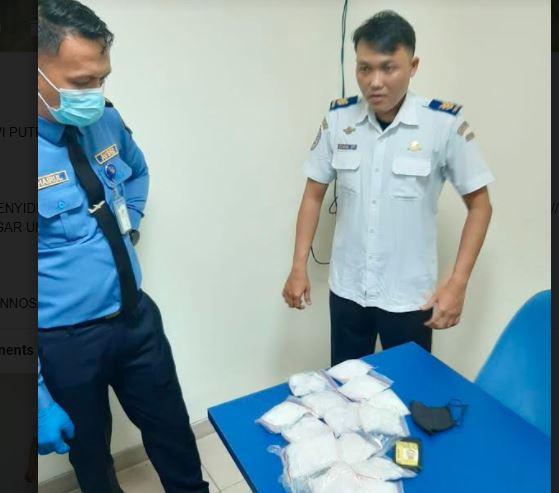 Rano Dwi Putra (40), an Indonesian Civil Servant employed in Bali by the Director-General of Civil Aviation at Bali’s Ngurah Rai Airport was arrested on Saturday, 22 August 2020, at the Hang Nadim Airport in Batam, Riau in possession of 3 kilograms of methamphetamines concealed inside his clothing.

Rano Dwi Putra was not traveling in connection with his employment but was, at the time of his arrest, wearing his daily service uniform as a civil Aviation Official.

Traveling with a female companion, Maulidia, the couple were arrested in Batam in transit on a flight from Pekanbaru with a continuing flight booked to Surabaya, East Java.

During the transit in Batam, Putra and Maulidia were apprehended at an airport restaurant by security staff and subsequently searched. Videos on local media and shown here show the Rano Dwi Putra forced to strip down to his underwear where the 3 kilograms of narcotics in plastic bags were concealed inside his underwear and taped to his legs.

A further 1.39 kilograms of methamphetamine were found in the possession of Maulidia.

Putra told investigators he had been promised Rp. 40 million to act as a drug courier while his female companion was to be paid Rp. 20 million.

Under interrogation, Putra admitted that he had used his uniform and official airport passes to smuggle narcotics on three separate occasions in the past.

Both Putra and Maulidia now face a maximum penalty of execution before a firing squad if found guilty of smuggling the large quantity of narcotics.

NusaBali and the State News Agency Antara quote Adita Irawati, a Ministry of Transportation spokesperson, who confirms that both Putra and Maulidia are employees of the Department of Civil Aviation. The spokesperson said: “We emphasized that those arrested were involved in an personal air trip and were not traveling on any official assignment, even though the two were wearing heir daily work uniform.”

Noviansyah, speaking on behalf of Bali’s Ngurah Rai International Airport, said much the same, underlining that Rano and his female companion, despite their use of government uniforms, were not traveling on any official duty.

Rao Dwi Putra has been employed in the General Affairs and Personel section of Bali’s Airport Authority since 2009.

Bali officials said that during his 11 years of employment in Bali. Rano Dwi Putra had given no indication of any involvement with the narcotics trade. However, he was given a written reprimand on 15 July 2020 for being absent from his assigned job for four days.

Noviansyah said the Bali Airport Authority is leaving the handling of the legal processing of Rano Dwi Putra and Maulidia in the hands of legal authorities and providing any assistance requested by law enforcement officials.

Noviansyah said the arrest of Puta and Maulidia would prompt the Airport Authority in the future to undertake health and drug reviews of their 126 employees to detect any illicit drug use. At the same time, the National Anti-Narcotics Agency will be asked to undertake education on the dangers of drug use to benefit airport workers.