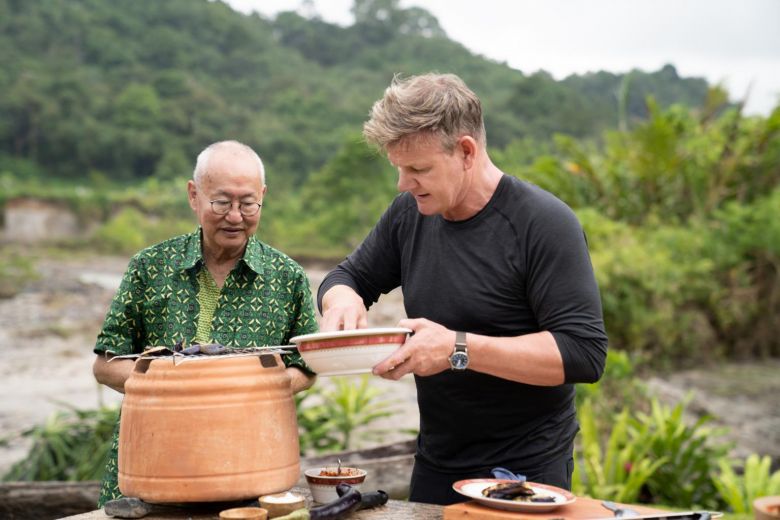 Born in Malang, East Java in 1947, William Wongso acquired his culinary inclinations from his Father, Wong See Hwa (Soewadi Wongso). Soewadi Wongso was a pioneering immigrant filmmaker who worked at the National Palace and documented Indonesia’s first President Sukarno on international visits in the early days of the Republic while sharing his love of cooking with family and friends.

Equally awed by his Father’s film-making and cooking skills, Wongso eventually made a hard career choice and surrendered to the call of the kitchen. An inveterate collector of recipes and cooking tricks from local roadside food stalls (warung) in Malang and hotel restaurants. William’s culinary training was formally launched with the opening of Vineth Bakery in 1977 in Central Jakarta. His training was further honed to a level of professional excellence by attending a baking program at the East Sydney Technical College in 1978, followed by long periods of training and work assignments in The Netherlands, Germany, France, and Italy before returning home to Indonesia in 1987.

In Indonesia, William employed his passion for cooking to establish a successful bakery franchise and catering company. Later, he took a uniquely bold step of opening an elegant fine dining restaurant that operated solely as an exclusive catering venue and the location for “pop-up” special degustation events” that sold out as quickly as each new evening’s exciting menu was announced.

Respected and loved by colleagues and those fortunate enough to dine at his table, William received the Chevalier dans l’Ordre National du Merite from the French Minister of Agriculture in 2001 for his contributions to promoting French gastronomy; an award acknowledging his professional excellence and support of vocational training from then Indonesian Vice-President Jusuf Kalla in 2008; and was named a Goodwill Ambassador by the Korean Tourism Board in 2009.

Wongso’s unrivaled role as a leading curator of Indonesian culinary traditions was demonstrated again when he supported the filming of Indonesian segments of Parts Unknown by the late Anthony Bourdain. Most recently, William supported Chef Gordon Ramsay’s spotlight on West Sumatran Cuisine for Uncharted – a global food series by the National Geographic Channel.

What did Gordon Ramsay have to say about sharing a West Sumatran kitchen with Indonesian Chef Extraordinaire William Wongso? “Talk about being pushed to your limits,” said Ramsay. “I may not be able to perfect a rendang in seven days, but honestly, I’m pretty happy with what I did. He has such a wealth of experience, and one that can only make me a much better chef.”

A personal friend of Bali Update’s Editor John Daniels dating from the mid-1980s, the very busy William Wongso generously made time for the following interview with Balidiscovery.com.

Balidiscovery.com: Tell us about your late Father’s love of cooking and how it influenced the decision to dedicate your professional life to cooking?

William Wongso: My dad was born in Suzhou, China, and had a diverse palate enjoying many types of food. During his spare time, when not involved in film production, he liked to cook Shanghainese cuisine at home.

Balidiscovery.com: With over four decades of culinary expeditions to almost every corner of the world, share a few of your most memorable recent food encounters?

William Wongso: Well, over the last 3 years, I was fortunate to be asked to showcase Indonesian food at several important official functions. I was invited to bring my team to cook for President Jokowi during his first official visit to the USA at a US Chamber of Commerce Event in Washington DC. Another trip saw me working in South Korea at a luncheon banquet hosted by the Indonesian Ambassador to Seoul, His Excellency Umar Hadi, at his official residence. In November 2019, we prepared a working lunch hosted by President Joko Widodo for 25 leading South Korean Conglomerates at the Lotte Hotel in Busan, South Korea.

Balidiscovery.com: Closer to home, as a first-generation Indonesian who loves and appreciates the many cooking traditions that cut across the entire Archipelago, can you share the Indonesian menu you prepared for a gathering of world leaders hosted by Indonesia’s President?

William Wongso: Let me share some pictures (editor: embedded) of the special Indonesian menu I prepared for President Joko Widodo while hosting a working lunch with South Korean Conglomerates in Busan with the theme – Embracing Korea with Indonesian Diversity.

Balidiscovery.com: What’s your assessment of Indonesia’s current wave of young culinary professionals’ and their ability to create and produce outstanding local cuisine?

William Wongso: Many emerging outstanding young chefs are working across the Indonesian Archipelago. I’m a chef, and it’s therefore my work to be critical about food and its preparation. For young Indonesian chefs aspiring to become truly great, they must confront and overcome the current lack of access to knowledge about Indonesian culinary traditions; a similar lack of intense training about Indonesia’s rich indigenous culinary traditions; and insufficient training on international cooking traditions at Indonesian vocational schools and hospitality academies.

Balidiscovery.com: Please share, from among the currently established and emerging star chefs in Indonesia, the names of some of those you most admire.

Balidiscovery.com: During the recent National Geographic Unchartered Series hosted by Chef Gordon Ramsay, Ramsay heaped lavish praise on you as a culinary mentor. Ramsay has cultivated a “bad boy” on-screen persona that terrorizes those assigned to join his kitchen brigades. Based on your time spent with Ramsay, is his intimidating reputation well-deserved?

William Wongso: He is quite sensible, fun, and hilarious… he came to understand and respect Western Sumatra food and culture. It just so happened, that I was given a chance to mentor him on this particular occasion. I was very honored to cook with him on an Uncharted Season2 episode in Western Sumatra.

Balidiscovery.com: Do you have a favorite anecdotal moment with Chef Gordon Ramsay?

William Wongso: After having a traditional Bajamba Feast at Pagaruyung Palace attended by the Governor and descendants of King Tanar Datar, we were walking together down the palace steps when he reminded me that I’m 73 years old! At that moment, I suddenly felt very old as Gordon very kindly reached out and held my arm as we walked down the steep palace stairs together.

Balidiscovery.com: Rendang has been cited by CNN and other media as one of the world’s most outstanding recipes. It was also a recipe featured in the National Geographic Unchartered filming. What’s your take on this dish and the secret to preparing your favorite version of Indonesian Rendang?

William Wongso: Rendang is the culinary pride of the Minangkabau Region of West Sumatra. In English, Rendang can be called “West Sumatran Carmelized Beef Curry.”  As I told Gordon Ramsay, there are more than 20 versions of Rendang, with every family having their own secret recipe inherited from their grandmothers. In West Sumatra, each village has its own spices paste composition and ingredients. The method that most Indonesian cook and are familiar with never cooks less than 4 hours due to the quality of the beef and the need to tenderize the meat by prolonged, slow cooking. But all Rendang recipes share caramelization as the finishing touch. Western Sumatra has the very best quality of ripe coconuts that yield thick coconut cream that is combined with chili and other spices on Rendang’s trip to the dining table.

Balidiscovery.com: At age 73 and not showing any signs of slowing down, can you share details of William Wongso’s next project?

William Wongso: Keeping up with the cyber-age, I will participate in InspiraHub Live Streaming – an interactive platform for conducting cooking clinics and sharing, through education, Indonesia’s diverse culinary traditions.

Balidiscovery.com: Sounds delicious, old friend. Where do I apply to serve as chief pot washer and food taster?