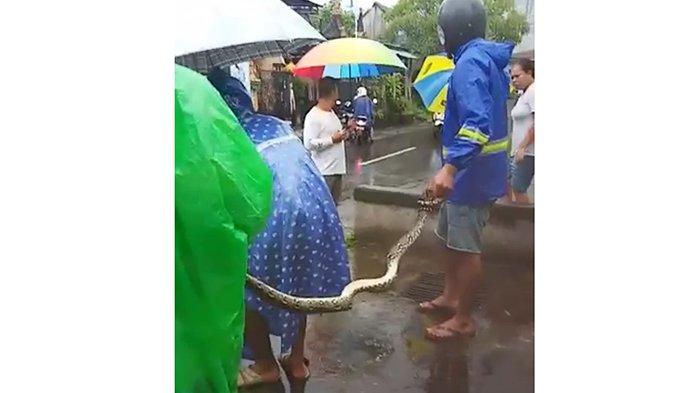 Bali Media, including Nusa Bali, was awash by how I Gusti Ngurah Bagus Permana, a 16-year-old student from Klungkung Regency, suffered a near-fatal encounter with a 2-meter long Python on Thursday, 21 May 2020.

The High School student had found a wild Python that he decided to adopt and bring back to his home in Semarapura as a pet. The underaged driver on a motorcycle trying to transport a two-meter-long snake with a mind of its own quickly came to an almost disastrous end. Beginning the journey with the snake’s head held in his left hand, the snake soon positioned itself around Bagus’ neck, and, as is the wont of Pythons, began to squeeze the life out of the High School Student.

At about 11:00 am, when boy and snake had arrived in front of the Pura Dalem Majapahit on Jalan Kresna in Semarapura, Bagus managed to park his motorcycle just before falling unconscious to the ground.

People passing by the location were initially reluctant to help the boy, frightened by a combination of the risk of being attacked by the giant snake and breaking physical distancing rules linked to the  COVID-19 Pandemic.

Eventually, several residents removed the snake that had its tail inside Bagus’s nose and its head nestled in his crotch area. Two people grabbed the snake by its tail and head, separating it from the injured student. Meanwhile, to restart Bagus’ breathing, another bystander successfully administered CPR.

The boy was bleeding from his ear, possibly bitten by the snake.

Police arrived at the scene a short while later and evacuated the boy to The Klungkung General Hospital while cautiously taking the snake into protective custody.

Eyewitnesses told Police how Bagus was holding the snake’s head in his left hand while trying to operate his motorcycle while the snake wrapped its body around the boy’s neck.

A younger brother of Bagus later told Police that Bagus had a habit of capturing snakes that he would keep as pets at home.