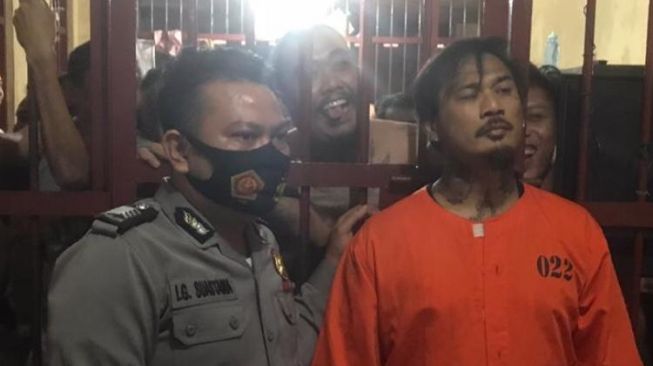 As reported previously on Balidiscovery.com in the article Bali Rock Musician Accused of Defamation , Gede Ari Astina (JRX), the drummer of the well-know Balinese Punk Rock Band Superman is Dead, has been accused of criminal defamation by the Indonesian Medical Association (IDI) for criticism he launched in connection with mandatory Rapid Testing for the coronavirus in Indonesia.

Following a series of police interviews, Radar Bali reports that JRX was finally declared a suspect by the Criminal Division of the Bali Police and taken into custody on Wednesday, 12 August 2020. Police confirm that the outspoken and controversial musician will be charged with hate speech and defamation of the IDI.

The charges are the result of a criminal complaint filed against JRX by the IDI with the Bali police. IDI was displeased when the musician accused the organization of being the “lackeys” (kacung) of the WHO. JRX felt that current requirements for pregnant women in Indonesia to undergo mandatory Rapid Testing unnecessarily put the health of the woman and their unborn children in jeopardy.

JRX, dressed in a t-shirt and shorts, was placed in handcuffs and led to a holding cell at Bali police headquarters.

The Director of the Bali Police Criminal Division, Yuliar Kus Nugroho, justified the arrest of JRX to prevent him from repeating his online defamation.

Police assure that COVID-19 protocols would govern JRX’s incarceration to prevent cross-contamination and any life-threatening infection. The drummer also underwent a medical examination and a Rapid Test during the arrest process.

According to Beritabali.com, Gede Ari Astina will be charged under the Indonesian Law on Information and Electronic Transaction Law with the publishing of speech that foments hate and conflict with an individual or group tribalism, religion, race, and ethnicity (SARA).

His attorney said, “If JRX’s manner of speech is considered unrefined and defamatory, hopefully, after JRX is put behind bars, someone who is polite and well-mannered enough is prepared to speak up on behalf of the common man during this pandemic.