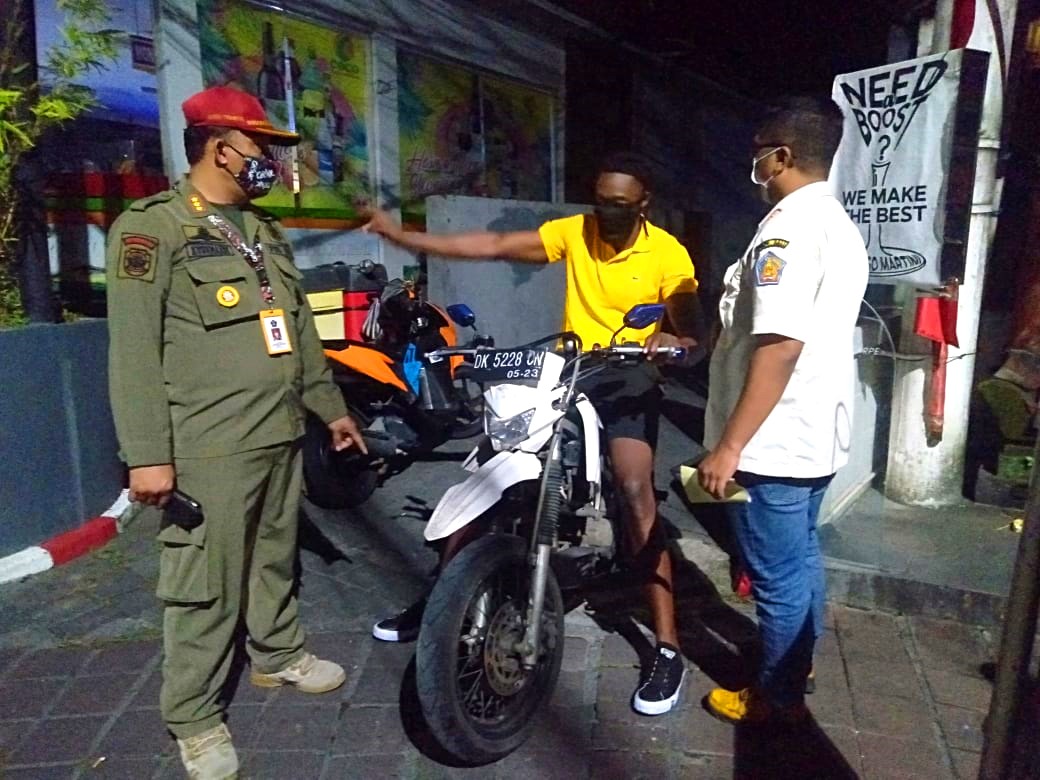 The head of operations of the Denpasar Police, Police Commissioner Gede Ganefo, told the press on Wednesday, 24 March 2021, that police undertook a ‘Yustiti Operation’ to address the growing number of domestic and foreign tourists flagrantly violating health protocols. A few foreigners’ actions create the false impression that the authorities are frightened to take action again foreign lawbreakers.

Ganefo said that the ‘Yustiti Operation netted a total of 18 people violating health protocols.’ Six of the violators receive verbal warnings; four Indonesian nationals were fined Rp. 100,000; Six foreign nationals were fined Rp. 1 million; and two were compelled to make written statements of remorse. The higher fines for foreign violators are in keeping with the wishes of Bali’s Governor I Wayan Koster, who issued a new regulation to dissuade foreign nationals from blatantly disrespecting the law. Those regulations also provide for the deportation of foreigners who become repeat offenders of established health protocols.

The police spokesman took special pains to explain that all health protocol violators are treated with respect and are never asked for roadside payoffs (pungli).

Earlier, on Monday, 22 March 2021, the Local Enforcement Agency Head for Bali (PP Povinsi Bali) took action against 55 health protocol violators in the Pantai Batu Bolong area of North Kuta. In that sweep, 11 foreigners were fined Rp. 1 million; 10 Indonesian were fined Rp. 100,000; and verbal reprimands were given to 27 foreigners for not wearing a mask or incorrectly wearing a mask. An additional 7 Indonesians could not pay their fines and were issued written summons to appear in court.

Ganefo said foreigners caught in the sweep provided classic defenses for their violations claiming that they were either ignorant of the rules or had forgotten to bring a mask.

Bali authorities’ patience is now apparently at an end. Armed with the knowledge that foreign jurisdictions are strictly enforcing health protocols and using stricter local rules for Bali, foreigners in Bali failing to follow the rules on wearing masks or gathering in large infectious clusters can reasonably expect large fines and risk possible deportation for repeat offenses.