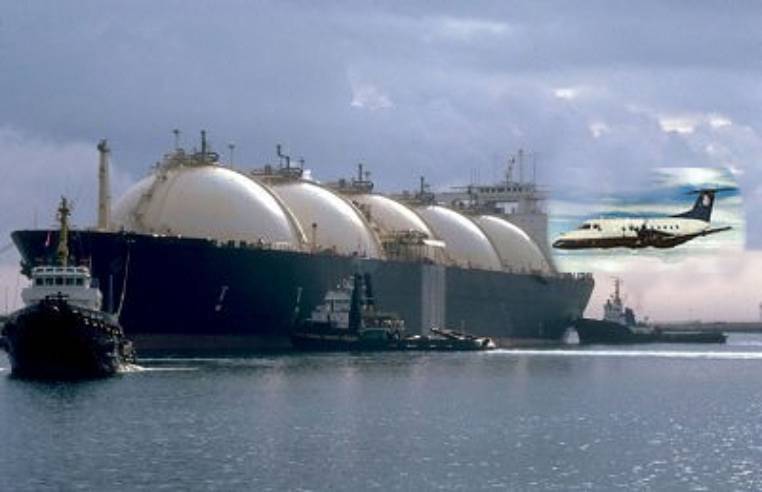 A delegation from the traditional village of Intaran in Sanur, Bali, visited the Bali House of Representatives (DPRD-Bali) on Monday morning, 06 June 2022, to register their objections to the construction of a Liquified Natural Gas (LNG) terminal in the port of Benoa.

The Indonesian Government’s plans to build an LNG terminal in or near the Island’s southernmost port of Benoa have sparked controversy and objections from many quarters. Religious circles are concerned that the area marked out for the project will violate the sanctity of several temple sites. Meanwhile, environmentalists are opposing the construction of the LNG storage facility will cause damage to the surrounding mangrove forest and accelerate the erosion of the shoreline at Sanur Beach.

Little noted, however, in the widespread local media coverage of possible objections to the erection of the LNG Terminal in South Bali is an even darker threat posed by the proposed positioning of the depot in a heavily populated area located a short distance from Bali’s airport Nusa Dua, the Sanur Beach Community, and Central Denpasar. The perceived wisdom of experts in international terrorism is that it is extremely ill-advised to allow the storage of industrial quantities of LNG near population centers of any kind.

As reported by VIVA.co.id, a delegation of 20 representatives led by the village (Banjar) chief (Kelian) and local community-watch members (pecalang) brought a formal statement on behalf of the community rejecting the plans for the new Bali LNG Terminal. Accordingly, the Intaran residents are seeking a dialogue with government officials regarding the planned LNG Terminal near the Port of Benoa.

The Intaran village leader (Bendesa Adat), I Gusti Agung Alit Kencana, told the press that his group is not opposed to clean energy. The group aims to oppose the site selection on religious grounds. “We reject the construction of the terminal, which should follow the provincial regulations be at Pelindo Benoa, but now it is shifted to Muntig Siokan, close to Sidakarya and Sanur,” said Kencana, when speaking at the DPRD building on Monday.

A member of the Intaran community, Ni Putu Putri Dia, stated that in addition to any legal impediments to building the LNG Terminal in the new location, additional research undertaken by community members and private watchdog organizations suggests the proposed terminal has the potential to damage the surrounding mangrove, ocean’s ecosystem, and the ocean’s bottom lands.

Continuing, the Intaran leader said the new location for the LNG Terminal would also infringe on sacred temple grounds, including some 200 meters at the Pengembak Temple and 320 meters at Pura Sukamerta.

12,473 village residents in Intaran have united in opposition to the proposed LNG project, complaining at the prospect that they would become permanent neighbors to a gas storage facility.

Although the local community knows the importance of clean energy for the Island of Bali, they shared their feeling that the project has not been sufficiently socialized to local residents, who still have many unanswered questions.

The villagers resent they were only allowed to attend a public hearing on the project on 21 May 2022, after the official permits had already been issued. Moreover, the villagers complained that the license was issued without the required environmental impact study (amdal).

The sense of public resentment grew when the Government did not bother to inform local legislators elected by the villagers about the proposed LNG Terminal. Consequently, villagers organized protests at the DPRD and wrote to the Governor of Bali and the Mayor of Denpasar.

WALHI – Indonesia’s Friends of the Earth

Indonesia’s Friends of the Earth (Walhi) have joined the chorus in opposition to the proposed LNG Terminal planned to be built by PT Dewata Energi Bersih and Persuda Bali on the ocean beachfront of the Bali’s Sidarkarya District.

Walhi Bali, Kekal Bali, and Frontier Bali expressed their shared concerns at a meeting held with the project developers on Saturday, 21 May 2022. The non-profit environmentalist groups expressed how the proposed LNG Terminal would trespass areas considered sacred by the Balinese and threaten environmental damage to the surrounding mangrove forest.

The director of Walhi-Bali, Made Krisna Dinata, told NusaBali.com that the creation of an LNG Terminal in Sidakarya would potentially destroy a sacred beachfront occupied by several Balinese temples and also degrade the surrounding mangrove forest area.

“We are worried that the development will also require the dredging of 3,300,000 square meters of ocean bottom-lands that will accelerate abrasion of the shorelands at the oceanside temples,” said Krisna.

Meanwhile, Made Sunarta, the head of Banjar Dangin Peken at Intaran, is also worried about the threat posed by the construction of the LNG Terminal. “Later, if the six temples (in Intaran) suffer abrasion, who will handle this, and where can we move these temples?” asked Sunarta.

Bali activists also question the Government’s plans to build a Sidakarya LNG Terminal and its alleged non-compliance with several local regulations, zoning rules, shoreline management plans, rules on the protection of small islands, and the project’s contradiction with President Widodo’s desire to restore and protect the mangrove areas.

For these reasons, Kekal Bali, Frontier-Bali, and Walhi Bali are united in rejecting plans to build the LNG Terminal at Sidakarya.

LNG is transported and stored at a very cool -260 degrees Fahrenheit (-162 degrees Centigrade). This low temperature renders the gas into a liquid state (hence: liquified) before eventually being converted back into a gaseous state and distributed in pipelines or stored in smaller portable tanks.

Natural gas is comprised of 90% methane gas, a highly combustible substance. In its liquid state, natural gas is not explosive, and small amounts of leaked LNG will usually evaporate into the atmosphere.

However, the catastrophic threat of an LNG explosion happens when large quantities of LNG suddenly escape and vaporize into a could that, if suddenly ignited as part of a storage breach, can produce catastrophic explosions. Professor James Fay, Emeritus of the Massachusetts Institute of Technology (MIT), describes the possibility of a “pool fire” that can occur when a storage facility experiences a significant leak. Sandia National Laboratory and the US Department of Energy describe a “pool fire” as a cataclysmic LNG explosion hot enough to melt steel at a distance of 1,200 feet and produce second-degree burns on exposed human skin miles away from the blast.

Professor Fay warns that a “pool fire’ is an “industrial fire” of unprecedented intensity that would burn out of control until it eventually burns itself out. “There is no way to put out that kind of fire,” warns Professor Fay. The large-scale explosion of an LNG storage facility would bring a level of devastation equal to that caused by a nuclear weapon and could ignite a rash of secondary fires that experts believe would be more destructive than the initial blast.

Rob Knake, a senior associate at Good Harbor Consulting, LLC – a firm that advises the US Department of Homeland Security, warns that Al-Qaeda has “specifically identified” and cited LNG storage facilities as a “desirable target” for terrorists. Good Harbor Consulting has projected that a successful terrorist attack on an LNG tanker could kill as many as 8,000 and injure 20,000 more.

While modern tankers and storage terminals are sturdily built and equipped with elaborate fire-fighting systems, these facilities are especially vulnerable to large-scale explosive breaches that would result from a terrorist 9-11 (2001) or USS Cole (2000) kamikaze-style attack.

As a result, universal security standards now dictate that LNG ports and LNG storage be operated in compliance with strict security protocols that include construction only being allowed in areas far removed from population centers at risk in the event of a terrorist attack.

It is a sad commentary on modern life that Bali remains an attractive target for international terrorism as a world-famous tourism destination. Bali’s vulnerability to terrorism is proven by two al-Qaeda-linked Jemaah Islamiyah attacks in 2002 and 2005 that claimed 227 lives.

Because LNG storage facilities have been identified as “desirable targets” by international terrorists, it follows that any decision by Bali to allow the installation of a large LNG storage facility at the epicenter of its tourism and population center and near the flight path of the Island’s airport will not go unnoticed by international terrorists.