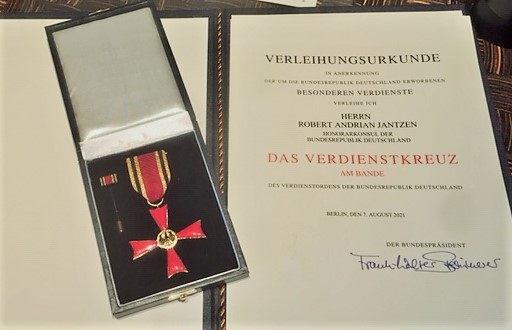 This adage is entirely apropos when discussing Reinhold Jantzen and his youngest son, Robert Jantzen. Understandably, Robert, like his older brother Michael, has grown to become a senior manager in the family food processing and distribution company PT Soejasch Bali, founded by the senior Jantzen in 1983.

Déjà Vu All Over Again”

But in the words of the immortal baseball great Yogi Berra, it’s a case of “Déjà Vu All Over Again” when it comes to the paths of public service taken by the Father-Son team of Reinhold and Robert Jantzen and their shared dedication to the People of Bali and the German Republic.

When Reinhold Jantzen was first appointed Honorary Consul in Bali for the Federal Republic of Germany in 1986, he was the youngest person appointed to such an important role. Over the ensuing 27 years, Reinhold worked tirelessly creating the business empire that PT Soejash Bali has become while simultaneously taking care of the estimated yearly average of 5,000 people who sought the Consulate’s assistance in problems ranging from visas, lost passports, deaths, births, hospitalizations, and other consular matters.

Over nearly three decades of diplomatic service, Reinhold welcomed the high and mighty of German political leadership to Bali, including two German Chancellors and at least two German Presidents. The Consul’s role in Bali also offered the many challenges that spanned a period of unprecedented political and economic upheaval in the late 1990s and the two Bali bombings of 2002 and 2005. Much praised for his calmness under pressure and knowledge of the “ins and outs” of the Indonesian bureaucracy, Reinhold Jantzen was twice-honored by two German Presidents with the Federal Cross of Merit with Ribbon (1996) and a further Federal Cross of Merit 1st Class (2003).

Following closely in the footsteps of his Father, Robert Jantzen assumed the reins of the Honorary Consul for the German Republic in Bali in 2013.

In quick succession, “Jantzen the Younger” proved himself to be cut of the same cloth as his esteemed father providing invaluable assistance to Germans traveling abroad and the local community during the trials and tribulations of the eruption of Mount Agung Volcano (2017), a major earthquake in Lombok (2018), the stranding thousands of tourists due to the collapse of Thomas Cook Travel (2019), and the ongoing challenge of dealing with the COVID-19 pandemic.

It was most certainly a very proud moment for the retired German Honorary Consul when, on Friday, 19 November 2021, the German Ambassador to Indonesia, H.E. Ina Lapel, pinned the Federal Republic’s prestigious Cross of Merit (Verdienstreuz am Bande) on his son’s chest.

Reinhold Jantzen Biography – “I Did it My Way: My Life Between Hamburg and Bali.”

Available for sale online or at Das Bistro by Mamas is the highly readable and entertaining autobiography of Reinhold Jantzen: “I Did it. . . My Way: My Life Between Hamburg and Bali.”

Jantzen, Reinhold and Andersen, Willi. I Did it My Way: My Life Between Hamburg and Bali. Jakarta, Afterhour Books, 2019.

Purchase from After Hours Books

Berlin’s Man in Bali Given a Cross of Merit

Don’t Bypass Das Bistro on the By Pass