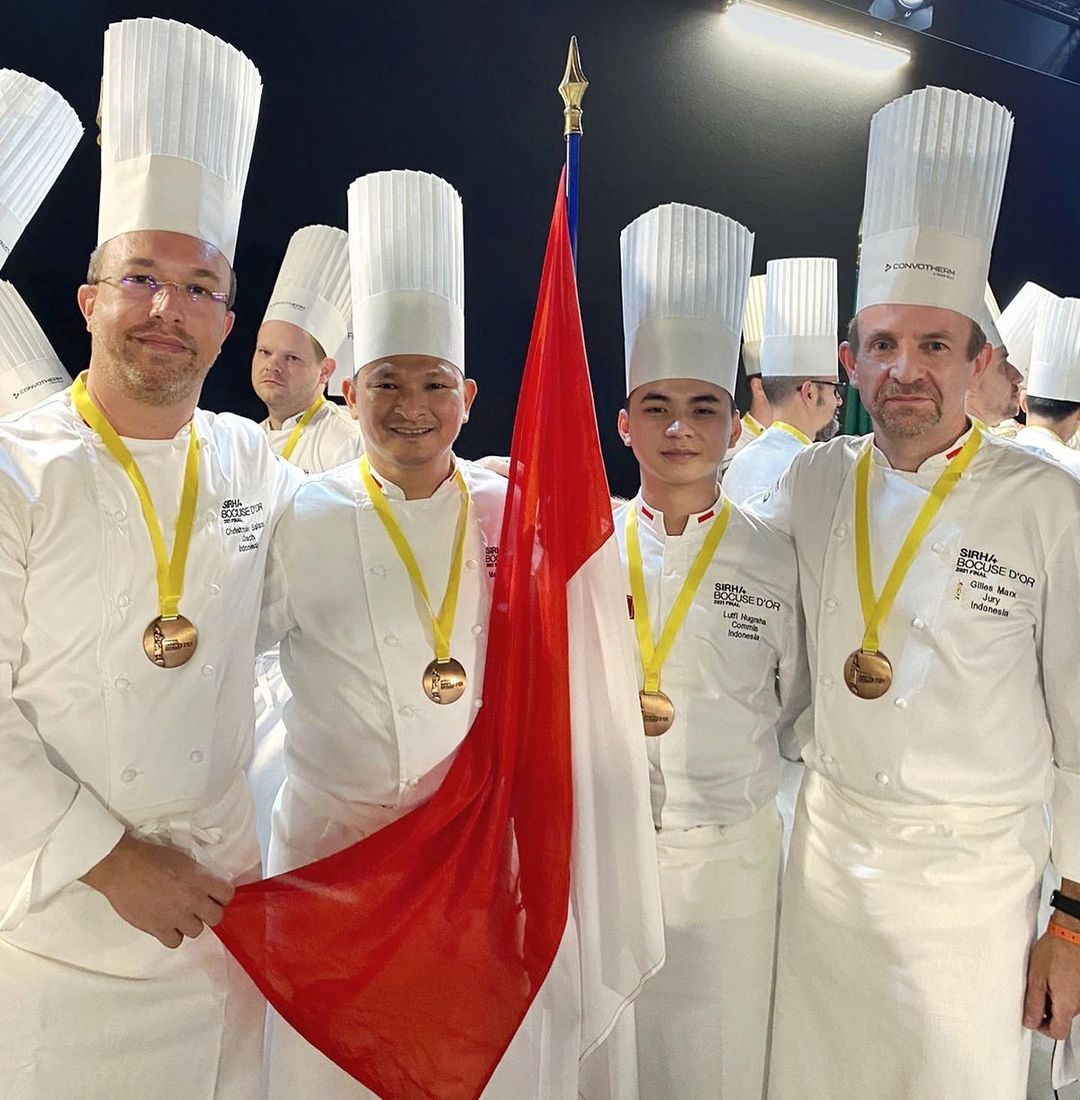 As part of a celebration of a simultaneous fine dining event happening across the globe, The Indonesian Academy of the Bocuse d Or is holding a one-night-only dinner to celebrate Indonesia’s participation in the Bocuse d’Or competition held in late September 2021 in Lyon, France.

The competition, founded by the late legendary Chef Paul Bocuse, brings together 24 finalist countries competing for honors in what is widely considered as the Olympiad of Gastronomy. Indonesia was among the finalists invited to compete after completing a grueling Asian selection round held in 2018 in Guangzhou, China.

For the event in Lyon, the Indonesian Team was led by Chefs Mandif Warokka and Lufti Nugraha of Blanco par Mandif in Ubud, Bali, with Chef Chris Salans of the Mozaic Restaurant serving as head coach, and Chef Gilles Marx from The Amuz in Jakarta as team president.

Still, in the Bocuse d’Or competitive spirit, the Indonesian Team has decided to regroup in Bali and share lessons learned and the dishes they prepared in September. Duplicating their competitive entries set before a jury of the world’s leading chefs, Team Indonesia will replicate their Lyon experience via a “Dinner of Champions – Bocuse d’Or Dinner Series” on one night only at the Mozaic Bali on 20 November 2021. On this occasion, participants in Bali will become the jury as they are served an indisputably “world-class” 5-course menu complemented by Amuse Bouches and Petit-Fours.

Commenting on the evening ahead, Chef Mandif Warokka, who led the Indonesian Team into culinary battle, said: “This competition has been one of the ultimate achievements in my life. I’ve been dreaming of bringing Indonesia into the world’s spotlight with my culinary skills and experience. Competing at this level of prestige and pressure was an amazing experience. This one-time dinner in Bali will allow the audience to taste the amazing creations we presented at the Bocuse d’Or.”

Mozaic Founder and Team Indonesia Coach for the Bocuse d’Or commented: “I am proud to be able to host such a prestigious dinner at Mozaic restaurant and to share all the hard work of the Indonesian Team that showcased Indonesia to the world at the Bocuse d’Or competition last September. I’m also super-excited to be able to bring in Chef Bayu and Chef Dedy to the Team to bring an additional WOW factor to the event.”

Supported by Aqua Reflection, Classic Fine Foods, and Penfolds – the first dinner of the series will be at Mozaic Restaurant Gastronomique in Ubud, Bali, on Saturday, 20 November 2021.

The second dinner of the series is at Amuz restaurant in Jakarta on Thursday, 9 December 2021.

Reservations are required as seating will be limited due to the complexity of the execution of the menu and in deference to COVID-19 protocols.

For dinner at Mozaic in Ubud, Bali on Saturday, 20 November, Chef Bayu Retno Timur of Mandapa, a Ritz-Carlton Reserve, and Pastry Chef Dedy Sutan – both contestants for the Indonesian Team of the World Pastry Cup in Lyon, France in 2017 – will join the Team in the Mozaic’s Kitchen.