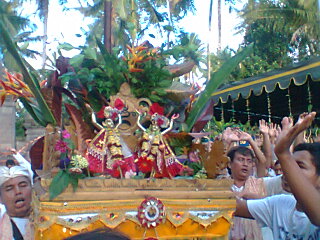 The Bali Council of Traditional Villages (Majelis Desa Adat – MDA) has formally considered the current controversy surrounding the teachings of the Hare Krishna Sect in Bali and other Hindu-derivative sects.

As a result, the MDA has issued a decision instructing the 1,493 traditional villages spread across the Province of Bali to decisively forbid members of Hare Krishna from carrying out their ritual practices in village temples and other public facilities operated by traditional village authorities in Bali.

As reported by NusaBali, MDA’s instruction to ban Hare Krishna religious observances was issued following a meeting with representatives from Every Regency in Bali, and the City of Denpasar convened in the MDA Secretariat in Niti Mandala, Denpasar on Wednesday, 05 August 2020.

The MDA decision was announced just two days after a mass demonstration held by the Forum Komunikasi (Forkom) Taksu Bali that rejected both the followers and beliefs of the Hare Krishna religious sect. The protesters claim that he idealogy of Hare Krishna does not conform with the traditional mainstream religious beliefs and culture of Indonesia.

The Supreme Head of MDA for the Province of Bali, Ida Panglingsir Agung Putra Sukahet, announced that his organization, in its capacity as leader of all traditional villages in Bali, had carefully examined recent activities held by the Sampradaya Association of the International Society For Krishna Consciousness (ISKCON) – including events organized under the name of Hare Krishna. Putra Sukahet stated that Hare Krishna’s theology is very different from Hinduism, and cannot claim to a part of Hinduism, let alone Bali-Hinduism.

Continuing, Sukahet said: “The instructions issued by the MDA-Bali aims quickly resolve the current polemic among Hindus in Bali. Hopefully, the decision issued by MDA-Bali will form a common basis for action by the traditional village chiefs (Bandesa Desa Adat) across Bali.”

Putra said the decision issued by MDA-Bali commands that all traditional villages prohibit Hare Krishna rituals and ceremonies in any village temple or public facility. Such rituals are now officially branded as heretical and contradicting mainstream Bali Hindu religious teachings.

Traditional villages across Bali are ordered to report any heretical sects to the MDA to allow corrective actions to be taken to eliminate Hare Krishna and similar sects from practicing in Bali.

MDA-Bali has formally communicated with the Indonesian Hindu Council (PHDI-Pusat), recommending the ending of any official acknowledgment and protection of ISKCON (The International Society for Krishna Consciousness) and the Hare Krishna sect. MDA reportedly told PHDI-Pusat that the West-Bengal-based ISKCON  and Hare Krishna hold beliefs that are very different from Hinduism and, as such, cannot be equated with or assumed to be a part of Hinduism.