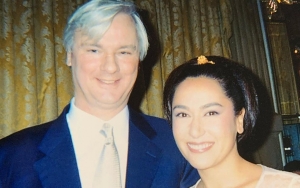 Dewi Soekarno, the Japanese-born wife of Indonesia’s first President, traveled to Bali to attend the cremation of her son-in-law – Frits Frederick Seeger. Her daughter and the Seeger’s wife, Karina Kartika Soekarno, who was in Tokyo when her husband’s died, accompanied her mother on the flight back to Bali.

Seeger (62), an internationally known banker and the husband of Dewi Soekarno and President Soekarno, died suddenly in Bali on Wednesday, 03 February 2021.

The cremation was conducted at the Kertha Semadi Mumbul Crematorium in South Kuta at 1:00 pm on Monday, o8 February 2021. Before the cremation, a Catholic mass was held for Seegers, a Dutch national.

Seeger is the father of three children, two from a previous marriage, and 14-year-old Frederik Kiran Soekarno Seeger, the grandson of Indonesia’s first President. Frederick Kiran Soekarno was in Bali to attend his Father’s cremation.

A spokesperson for the Seeger family attended the funeral and issued thanks to all those who assisted in conducting the service, including Ibu Dewi Soekarno, who had traveled to Bali from Tokyo to represent the Soekarno family.

Many floral memorial wreaths were in evidence at the funeral, including those from a number from ranking government officials. Floral tributes came from the National Secretary Pratikno, General A M Hendropriyono, the Mayor of Denpasar, the Regent of Badung Giri Prasta, the Regent and Deputy-Regent of Tabanan.

The Provincial Protocol Office for Bali did not encourage the press to attend the funeral and cremation.