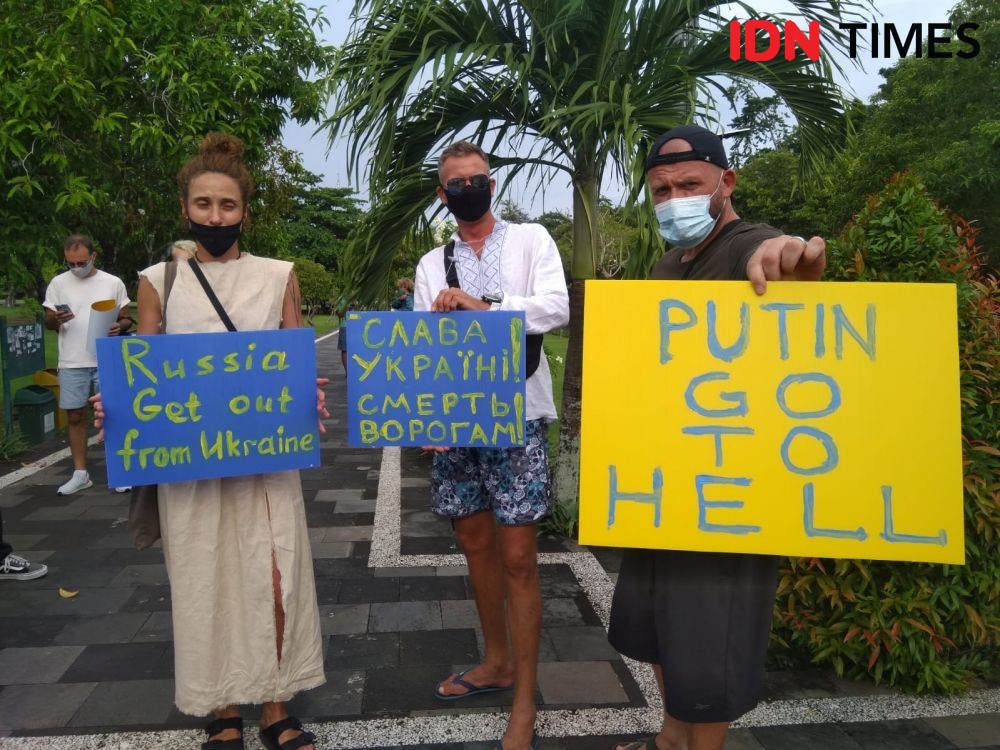 The Ministry of Justice and Human Rights is warning Ukrainians who participated in peaceful demonstrations in Denpasar, Bali on Tuesday, 01 March 2022 may now face deportation. The head of the Bali office of the Justice Ministry, Jamaruli Manihuruk, told Beritabali.com that his office will deport the foreign nationals involved in those protesting the invasion of Ukraine by Russian forces.

Manihuruk said in a written statement: “Firm action will be taken including sanctions in accordance with Immigration Law Number 6 of 2011.”

Meanwhile, CNN reports that one of the Ukrainians who participated in the protest has apologized for participating in the mass protest, saying the incident was triggered out of concern for their homeland.

The 01 March gathering of reportedly “hundreds” of Ukrainians held initially at the Bajra Sandhi Monument was quickly broken up by police for lacking the required permit for mass gatherings. The group then shifted to the front of the Ukrainian Consulate.

The head of the operations division of the Denpasar Police Precinct, Commissioner, I Made Uder, explained the dispersal of the crowd, saying: “We share a concern for their country. But, they (the protestors) must follow the rules and procedures. I dispersed the crow. That’s that. They had no permit of any kind. Foreigners cannot do as they like. They had no permit because they had failed to apply for permission. They were acting outside set procedures.”

Commissioner Uder told CNN Indonesia that the unauthorized demonstration occurred in the days leading up to the Balinese Holiday of Nyepi when there should be no activities in front of the Bajra Sandhi Monument. “We will hold Hari Raya Nyepi – silent day – they should honor this situation but instead hold a mass rally. These are foreigners. There are procedures. There is a consulate in Indonesia. There are rules.

Olga Chevaganiuk, identified by RadarBali.com as a spokesperson for the protestors, said that war must end and supports moves for peace. Adding: “We want this to stop because many Ukrainians and Russians have died,” she said.

Continuing, she said that the Ukrainians living in Bali wish for their nations to live in peace and do whatever is within their powers to help Ukraine. They are donating whatever funds they can while gathering clothing and food donations to be sent to their country. Donations are being collected for both humans and animals, both suffering from the invasion.

Also joining the demonstration was a Russian national, Dima Kazantcev, who said that although he is a Russian citizen, he has no desire to witness war. Adding: “From my heart, I have no desire for this war. As for Putin, he maybe has his viewpoint, but I hate war.”

Initially, the peaceful protestors intended to stage a gathering at Bajra Sandhi Monument (The Balinese Monument of the People’s Struggle) in Renon, Central Denpasar. Police quickly dispersed the crowd for conducting a mass gathering with the required permit and for failure to obey COVID-19 health protocols intended to prevent the spread of the coronavirus.

The group then relocated to a position in front of the Honorary Ukrainian Consulate on Jalan Gurita No.18, Pegok, Sesetan, Denpasar Selatan.

After meeting with Nyoman Astama, Ukraine’s Honorary Consul in Bali, the protestors sang the Ukrainian National Anthem before peacefully returning to their homes.