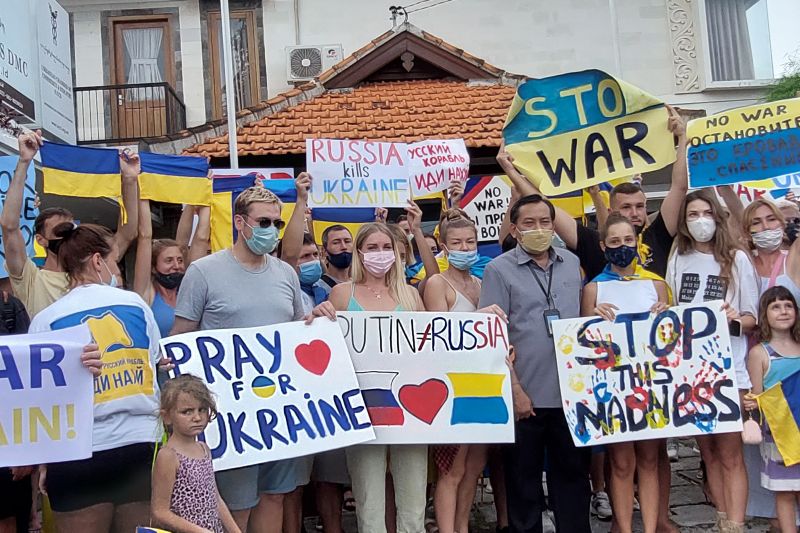 Kompas.com reports that hundreds of Ukrainians living in Bali participated in a peaceful demonstration condemning the decision by Russian President Vladimir Putin to invade their country. The Ukrainian demonstrators carried protest signs and Ukrainian flags as they gathered in front of the Ukrainian Consulate General Office on Tuesday, 01 March 2022.

Initially, the peaceful protestors intended to stage a gathering at Bajra Sandhi Monument (The Balinese Monument of the People’s Struggle) in Renon, Central Denpasar. Police immediately dispersed the crowd from the monument location for conducting a mass gathering without the required permit and for failure to obey COVID-19 health protocols intended to prevent the spread of the coronavirus.

The group then relocated to a position in front of the Honorary Ukrainian Consulate on Jalan Gurita No.18, Pegok, Sesetan, Denpasar Selatan.

Olga Chevaganiuk, identified by RadarBali.com as a spokesperson for the protestors, said that war must end and supports moves for peace. Adding: “We want this to stop because many Ukrainians and Russians have died,” she said.

Continuing, she said that the Ukrainians living in Bali wish for their nations to live in peace and do whatever is within their powers to help Ukraine. They are donating whatever funds they can while gathering clothing and food donations to be sent to their country. Donations are being collected for both humans and animals, both suffering from the invasion.

Also joining the demonstration was a Russian national, Dima Kazantcev, who said that although he is a Russian citizen, he has no desire to witness war. Adding: “From my heart, I have no desire for this war. As for Putin, he maybe has his viewpoint, but I hate war.”

The Honorary Consul for Ukraine in Denpasar, I Nyoman Astama, described the Ukrainian protests in Bali as a demonstration of moral support for the victims and their fellow Ukrainians. “Maybe it would be the same if we (Indonesians) were experiencing a war and we were not at home, and there was little we could do but voice our moral support,” said Astama.

The Honorary Consul, a native Balinese, said he hopes the appropriate parties will hear the sentiments and wishes of the Ukrainian in Bali and negotiations are still possible to end the invasion.

Astama said that based on information obtained from the Indonesian Ministry of Law and Human Rights, which encompasses the immigration department, around 3,200 Ukrainian citizens live in Bali. Many of these people are believed to be digital nomads.

Police dispersed the protestors who were seen to be conducting mass gatherings without a permit and outside health protocols rules to prevent the spread of COVID-19.

When police arrived on the scene, the protestors were given 2 minutes to disperse.

Separately, IDN TIMES reported the Ukrainian Honorary Consul has told them in Bali that many Ukrainians are prevented from gaining access to funds held by the homeland’s banking system or communicating with their families. Astama shared that many of the Ukrainians staying in Bali come from the three areas of the country under severe attack by Russian invaders.

Many Ukrainians want to return to their home country but are prevented by the lack of international airlines flying to the area.

Astama expressed a concern that Ukrainians living in Bali may soon require financial assistance due to an inability to access funds. Meanwhile, Russians living in Bali have seen their Ruble-denominated resources devalue by 30% in less than one week.