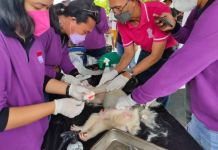 A rare and sacred white monkey was discovered covered in wounds at mid-day Sunday, 06 February 2022, in Pecatu Village, South Kuta.

The traditional village chief (Bendesa) of Pecatu, Made Sumerta, told RadarBali.com that a group of veterinarians and medical doctors from the Alumni Association of Udayana University (Ikayana) rushed to the scene to provide emergency medical care to the badly injured primate.

Sumerta said he assumed that the white monkey (Wenara Pertak) suffered its injuries in clashes between seven separate troops of monkeys that inhabit the area surrounding the Village of Pecatu. Speaking on Sunday, Sumerta said: “The operation was performed at mid-day, around noon. I was first told of the injured white monkey by the Jero Mangku Pura Salem Selonding (unpaid temple attendant). I then contacted the Ikayana Association that deals with animal medicine.”

Separately, the second deputy chairman of the veterinarian section of Ikayana, Dr. Dewa Made Hartanaya, explained that the injuries sustained by the monkey may have been inflicted over the past five days. He said the wounds were severe, requiring him, with the help of two colleagues, to apply sutures to close the injuries.

“If you look at the wounds, they were very severe, deep in nature, and numerous. There were around 35 separate wounds on the monkey’s shoulder, right arm, and right leg,” Hartanaya explained.

During the monkey’s recovery, it will be kept in a cage placed at the Pura Dalem Selonding.

Local village leaders confirmed that the Temple’s area is a popular habitat for several troops of wild monkeys. The doctors are concerned that if the white monkey is separated from his group for too long, he could be rejected when trying to reassimilate. “Now he is caged at the Pura Dalem Selonding Temple so he won’t be bothered by other monkeys and to allow a speedy recovery,” explained Hartanaya.

The veterinarian said the white money would need 7-10 days of rest to make a full recovery. He has asked those in charge of the Temple to assist in the care and nursing of the injured monkey, with his team ready at any time to provide additional support and medical care.

Many people in the Pecatu area considered the rare white monkey as sacred, foreboding disaster for the village should the primate suffer injury or death.

Too Little Monkey Business in Bali