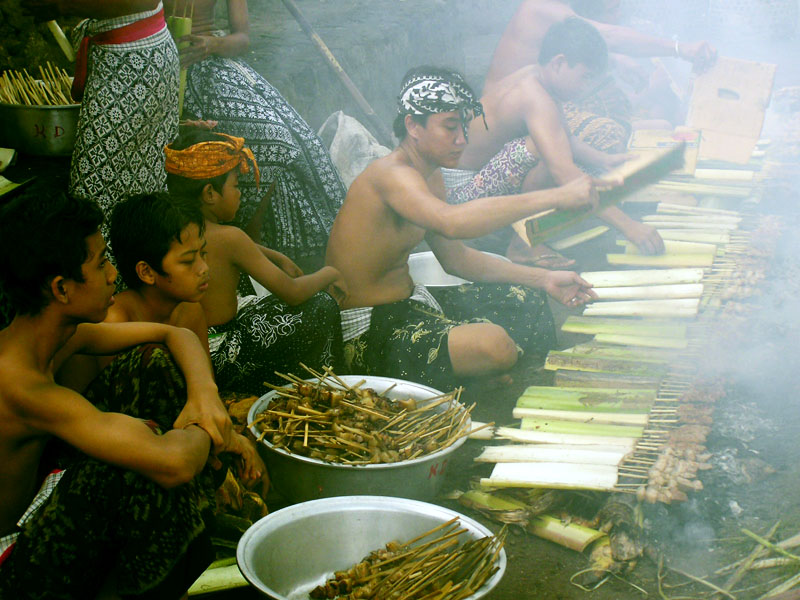 While the Balinese icons of Ayam Betutu or Bebek Betutu are legendary and quintessentially Balinese dishes, the following list of 7 recommendations explores other Balinese dishes that can form part of any culinary exploration of the Island suitable for those even operating under the strictest budget.

Sate or satay – meats roasted over charcoal or fire on small bamboo sticks – has many variants across Southeast Asia.

The Balinese version of this dish, known as Satay Lilit, can be made from pork, fish, chicken, beef, and in times past, even turtle meat. Satay in other regions typically sees the meat or seafood cut into manageable chunks and served en brochette – skewered on the roasting sticks.

In Bali, the protein selected is minced or ground and spiced with grated coconut, coconut milk, lemon juice, shallots, and pepper. The mince is wrapped around bamboo sticks or stalks of lemongrass before being grilled to delicious perfection. In Balinese, the word lilit means “to wrap around” and describes how the meat or seafood is lathered around the flat skewers.

While “lawar” is a term that also refers to bats, the famous dish of lawar in Bali has nothing to do with flying mammals. Lawar is primarily a vegetable dish that usually incorporates asparagus, beans (kacang Panjang), coconut, coconut milk, beaten eggs, kaffir lime leaves, fried shallots, and other spices with some form of mixed meat.

Lawar prepared according to traditional recipes using chicken or pork can often include the animal’s blood for added taste.

Lawar forms a part of the popular arrays of items included in nasi campur and often accompanies the Balinese favorite of babi guling.

Often credited with originating from the East Bali regency of Klungkung, Serombotan looks strikingly like another Balinese dish – Urap. In contrast to Urap that is a salad of seasoned vegetables mixed with desiccated coconut, Serombatan is a combination of spices, including desiccated coconut, turmeric, galangal, aromatic ginger (kencur), and spicy peanut sauce.

Traditional meals in Indonesia do not necessarily end with a sweet-filled dessert course. But, don’t be mistaken, the Indonesian sweet tooth is second to none, with delicious dessert-like dishes enjoyed after, before, and even between meals. In Bali and the rest of Indonesia, Sweets are often referred to as jajan pasar – “market sweets” sold at stands in local markets dedicated exclusively to tempting sweets.

Delicious and highly affordable – Nasi Jingo is a small packet of food folded in banana leaves sold for only Rp. 1,500 per serving. Nasi Jinggo traces its roots to a streetside food stall operated in the 1980s by a Javanese husband-wife team who sold these packets as late-night snacks from the Kumbasari Market on Gadjah Mada Street in Denpasar.

The fame of Nasi Jinggo quickly spread and now is available in many areas of Indonesia. The name Nasi Jinggo, first coined in Bali, has stuck. The name of “Nasi Jinggo” is coincidentally also its price. In Indonesian slang, the Chinese Hokkien phrase “jeng go” means “one thousand five hundred.”

Depending on your luck, your Rp. 1,500 will yield in an artfully-wrapped banana leaf package containing a small scoop of white rice accompanied by fried Tempe, delicious sambal, sautéed grated coconut (serundeng), and spiced shredded coconut (ayam pelalah). Nasi Jinggo can also include a small serving of beef or pork, an egg, and a savoring dashing of fried noodles.

This Balinese rice porridge dish comes from the north Bali Regency of Buleleng and the community of Tejakula. The essence of Balinese comfort food, Bubur Mengguh is a breakfast specialty or a dish enjoyed as a nutritional fortification on chilly, rainy days.

People in Bali will often sit down to their bowl of Bubur Mengguh with a side dish of urab sayur–a salad of steamed vegetables laced with spiced grated coconut. The vegetables used in preparing urap or urab are usually spinach, water spinach, young cassava leaves, papaya leaves, Chinese long beans, bean sprouts, and cabbage – all lightly blanched before being combined with the shredded coconut and ground shallot dressing.

Last, but by no means least on this list of affordable Balinese dishes, is Tum Ayam. Made with minced chicken that is steamed or grilled after being wrapped tightly in banana leaf, variation can also see the use of minced beef or pork.

Unlike pepes found in Java and other parts of Indonesia, Tum Ayam might best be compared to their Western counterparts of confit or rillettes. The minced chicken is blended with bumbu genep – a standard Balinese spice paste before being wrapped for steaming or grilling.

These seven dishes only scratch the surface of culinary discoveries awaiting Bali visitors.